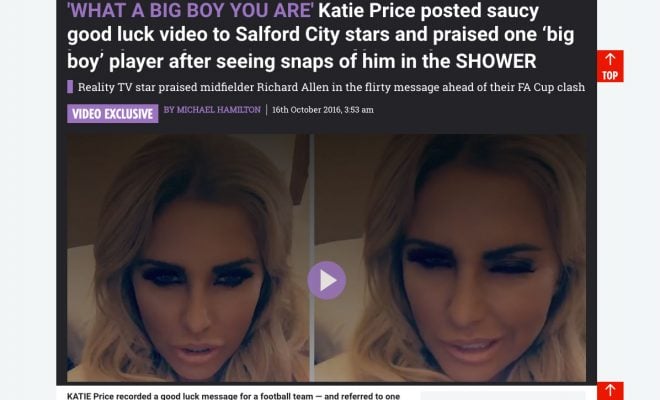 Sell a video to The Sun Newspaper

Would you like to sell a video to The Sun newspaper? Talk to the Press provide a free service to help you place your content in the national press, and get paid the maximum fee possible. We work closely with The Sun as well as every other national newspaper and magazine.

If you would like to sell a video to The Sun newspaper, get in touch today to find out what your content is worth. There is no obligation and no charge. Simply tell us a little bit about your video by filling out the story valuation form on this page. You can also call our team using the number at the top of this page, or by visiting our Contact page.

This week we helped a source sell his celebrity video of Kate Price wishing a semi-pro footballer a happy birthday. The appeared in The Sun on Sunday.

Our source told us how teammates at Salford City FC were ‘’thrilled’ when the TV babe sent them a video labelling midfielder Richard Allen ‘a big boy’ last month. 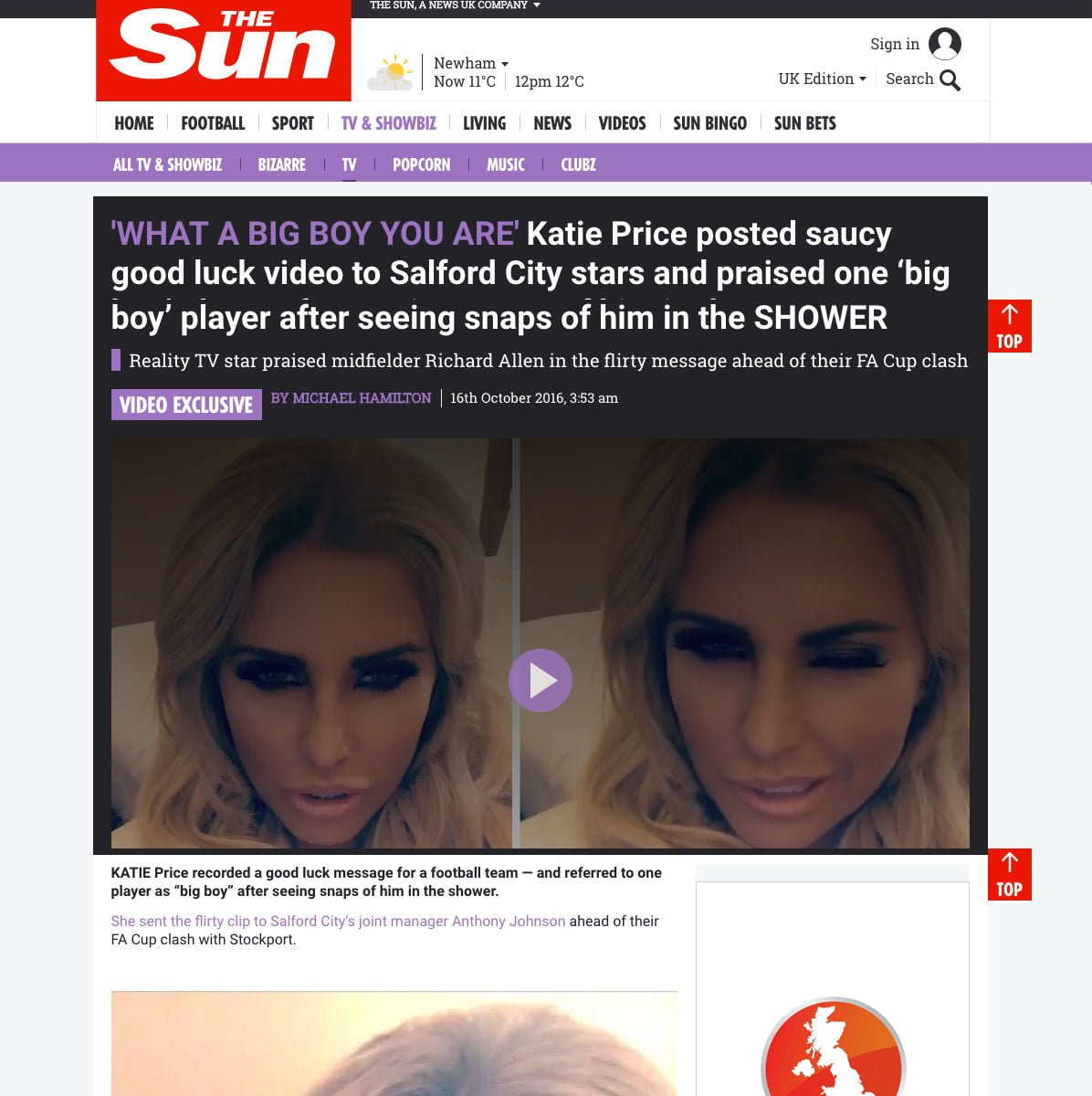 In the nine-second clip, 38-year-old ‘Pricey’ wishes manager Anthony Johnson a happy birthday and wishes the semi-pro team luck – adding that teammate Richard is a ‘very big boy’ and winking.

Gary and Phil Neville, Peter Lim, Nicky Butt, Paul Scholes and Ryan Giggs took over the running of the Salford City FC in 2014 and the team play in National League North.

The married mum-of-five said: “Good luck with the game boys tomorrow, and happy birthday to you Jonno. And Richard, woo-hoo! What a big boy you are.”

According to the source, the partner of one teammate works as Katie Price’s make-up artist and showed the star photos of Richard and the team in the shower.

Clearly impressed by Richard, Katie recorded the clip, which was then posted in a WhatsApp group on 30 September.

Sadly, the reality star’s message didn’t bring them much luck – as they lost to Stockport County 2-0 the following day.

The source said: “To have someone of that calibre record a message for us was amazing, we were buzzing. Richard was chuffed by Katie’s comments, he couldn’t believe his luck.

“Her makeup artist must have shown Katie pics of our shower banter and she obviously took a shine to Richard. Her message might have made us a bit too excited though as we lost the game the following day.”

How to sell a video to the Sun newspaper

If you have a video of a celebrity and want to know how much it’s worth get in touch with us and we’ll secure you the highest fee for your story. Whether you want to sell a video to the Sun newspaper or any other newspaper or magazine, we work alongside all of the national papers, women’s mags and daytime TV shows – and all of our contacts are senior decision makers. If you’re not happy with an offer we secure you, you’re not obliged to go through with it.

The fee will depend on how big it goes in the paper, for instance if it’s a front page story it will be significantly higher than a story which appears inside the paper.

Fill out the story submission form on the page or call us on 0207 549 5406. Please do not contact anyone else with your story for 24 hours after you’ve submitted it to us. To ensure you get the highest fee possible the story must be exclusive and not touted around. Exclusivity is the key to ensuring you get the highest payment.

Latest news and stories from Talk to the Press

Here’s a small selection of other people who have used Talk to the Press to sell a video to The Sun, or sell photos, videos and stories to other magazines and newspapers…