Ultimate betrayal story – robbed by my best friend of 26 years, read our client’s story in this week’s @chatmagazine 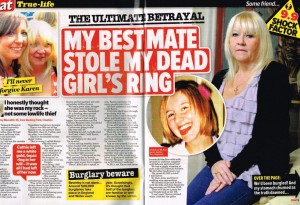 When Beverley Meredith met Karen Fletcher she thought they’d be friends for life. And for 26 years, Karen was a good friend to Beverley and a great support when her beloved daughter died at 29 a brain tumour five years ago.

But bizarrely, last year, Karen broke into Beverley’s house in Manchester and spent 45 minutes rummaging through Beverley’s most prized possessions before stealing them. Incredibly, she stole Beverley’s wedding rings and her dead daughter’s jewellery too.

After, she was caught on a neighbours CCTV loading her car with bags of Karen’s belongings before getting in and speeding off without a care in the world.

In October, Karen Fletcher was convicted of burglary in a dwelling at Manchester Crown Court and Fletcher, who had no previous convictions, was jailed to nine months in prison. But the judge said her behaviour was ‘diabolical’ and was ‘disgusted’ at how a close friend of 26 years could betray someone’s trust and steal items from her deceased daughter.

Today, devastated Beverley is naming and shaming Karen in case she steals of other friends. We’ve helped her secure a deal from several magazines for her betrayal story and we’ll also be getting her coverage with a newspaper.

‘She’s completely cut throat,’ says Beverley. ‘How could she steal from one of her own good friends? She watched me grieve the death of my beautiful daughter and knew how much my wedding to Dave meant – after a long engagement. I was heartbroken and disgusted when I found out she was behind it.’

In 1987, when Beverley, now 55, met Karen, now 44, in her local pub. Although Karen was nine years younger they hit it off and became good friends. They would often meet up for coffee, drinks and loved shopping together. As the years rolled by, the pair stayed close friends.

On June, 3, 2013, Karen was out shopping when Karen called asking if she wanted to meet up. Karen came and met her in town to do some shopping before driving back to Beverley’s. Once inside, Karen asked about her gold sovereign ring and also to see her wedding shoes. Beverley, who was due to get married in June after a long engagement, went upstairs to fetch them. Unbeknown to her, whilst she was upstairs, Karen had snuck her backdoor keys in her pocket – with the plan to come back and burgle her home when she was out.

After, Karen drove Beverley back to the pub and the pair sat outside and and a enjoyed a drink in the sun. Around 3:50pm, Karen said she needed to go. Her last words to Beverley were, ‘I’ll see you at the wedding reception.’ Beverley was joined by a few more friends and stayed in the pub.

Unbelievably, Karen drove back to Beverley’s house, let herself in through the backdoor and then spent 45 minutes going through Beverley’s prized possessions before stealing £4500 worth of them. As she loaded her car with bags and drove off without a care on the world, she was unaware the whole incident was captured on CCTV.

Beverley noticed the items were missing two days later, although there had been no sign of a break in. She thought she must have been burgled but the last thing she expected was that her best friend was responsible. She went and asked neighbours if they’d seen anything and they said they’d seen Karen, but they hadn’t thought anything of it as they knew Karen visited a lot. But when Beverley contacted the police, Karen was brought in for questioning.

Although she denied having anything to do with the burglary, in her house they found Lady Gaga perfume and a Radley purse in her flat (which she’d also stolen from Beverley’s). Then the CCTV evidence emerged, which Beverley says left her floored. With less than a month until the wedding, Beverley and her future husband were devastated. They had to go out and buy more wedding rings and try not to let Karen’s behaviour ruin their big day.

But Beverley says she couldn’t get over the loss of her daughter’s rings – as she felt that was all she had left of her. On Friday 25th October 2013, after changing her plea several times, Karen finally pleaded guilty to burglary in a dwelling at Manchester Crown Court. She was sentenced to nine months in prison.

Although she never apologised, her defence lawyer said she was going through financial difficulty after her business broke down. But Beverley says there’s no excuse to steal from a friend.

‘She broke my heart,’ says Beverley. ‘Her betrayal is beyond belief.’

If you’ve experienced betrayal, and would like to sell your story to a magazine, email us on message@talktothepress.com or fill out the sell my story form to the right.

Talk to the Press
← Previous Story TTTP client features in Marie Claire magazine sharing her story about her elective mastectomy
Next Story → We help brave mum Gemma sell her story to Chat magazine, following brutal attack on her own doorstep