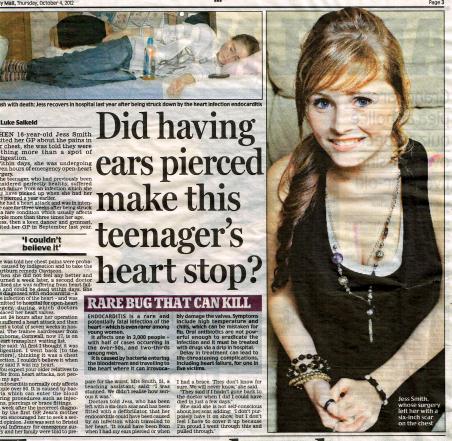 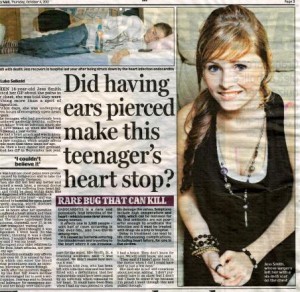 As soon as Jess Smith got in touch with us, we knew newspapers would be interested in her story and we secured her coverage in a numerous national newspapers, including the Daily Mail and the Sun.

Until last year, Jess had led a healthy and active life – she loved dance and gymnastics – and thought heart attacks only happened to old people. But at 16, she found herself experiencing chest pains. Because Jess was so fit and young her GP told her she had indigestion and prescribed her Gaviscon. But Jess’ pains didn’t subside and one week later her worried mum, Dawn, 51, took her to an out of hours surgery.

Jess underwent an ECG at the hospital and doctors quickly diagnosed her with endocarditis – a serious and rare infection involving the heart, and already had heart failure. She was referred on to the Bristol Royal Infirmary and booked in for open heart surgery the following day.

She was in theatre for over five hours when the surgeon told Jess’s mum to prepare for the worst because they didn’t think she was going to make it. Miraculously, after eight hours, Jess pulled through. But less than 24 hours later she suffered a heart attack and was rushed back into theatre and had a stunt put in.

Jess had to stay in hospital for seven weeks after the surgery and spent two of them recovering in intensive care. During this time, she was told she would need a heart transplant in the future and that she was now on the waiting list. Jess’ life has changed dramatically, but she is now at college and studying to be a hairdresser.

‘My dream of becoming a dancer is out of reach now,’ says Jess, who lives with her mum and brother in Cornwall. ‘I know it’s too dangerous for me to pursue so I’m studying hairdressing instead. You expect your older relatives to suffer from heart attacks, not people my age. I want other people to be aware of the signs.’

We’ve now secured Jess a deal with a women’s magazine too.

If you’ve got a story you’d like to see covered in newspapers and magazines, email us on message@talktothepress.com or fill out the sell my story form on the right