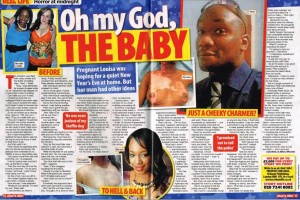 Pregnant Louisa Marke was hoping for a quiet New Year’s Eve at home. But her boyfriend Peter Scott had other ideas.

Despite Louisa carrying his child, in an act of unimaginable violence, he tipped a kettle of boiling water over her. Incredibly, the baby survived the attack but Louisa couldn’t go ahead with the pregnancy and had a termination. In June 2008, Peter Scott, , who was working in a call centre at the time, was charged with GBH and sentenced at Harrow Crown Court to three years in prison.

Louisa, who’s now 27, decided to speak out about the attack help other victims of domestic violence who may be suffering in silence. We secured her a deal for her domestic violence survival story with That’s Life magazine.

When Louisa first met Peter, he was charming and had a great sense of humour. But when they moved in together in 2006 Louisa noticed changes in Peter. He became jealous – even over Louisa’s pet dog, Lady. One evening in 2006, Louisa got home from work and noticed he’d drunk a lot a big bottle of vodka and attacked her. The next day, Peter cried and begged her to stay with him – promising it would never happen again. Louisa took him back but their relationship was never the same and it became volatile.

By New Year’s Even 2007, Louisa was pregnant and hoping to have a nice evening in. But Peter started an argument, and ended up grabbing the kettle of boiling water and tipping it over Louisa. She began to scream and battled to get him off. She looked down and she could see her skin on her chest peeling. The pain was excruciating and she screamed at him to call an ambulance. She rushed to the bathroom and filled a blanket with cold water and put it over her burns.

Luckily, Louisa found her phone and dialled 999. She was rushed to Chelsea and Westminster hospital and given morphine. Peter was there the whole time and initially the medical staff believed she’d had a terrible accident and he was playing the role of the worried, supportive boyfriend. Afterwards, Louisa was reluctant to press charges, but her mother convinced her she had to. Peter admitted his guilt as soon as her was arrested.

Louisa has finally got her life back on track and is studying law at university. ‘I’m studying law,’ says Louisa. ‘Everything he put me through made me determined to be a success. One day I’d like to work for the CPS and help put dangerous men behind bars and help other victims of domestic violence. I should never have taken him back after the first attack and I hope other women who hear my story think twice about forgiving a violent man.’

‘Now, I’ve finally learned to love my scars. They are proof I went to hell and back – and survived.’

If you’ve got a domestic violence survival story that you’d like to share with a woman’s magazine or a newspaper, email us on message@talktothepress.com or fill out the sell my story form to the right. We will get you the best deal for your story.

Talk to the Press
← Previous Story Justice after abuse: our brave client shares her story with Take a Break magazine
Next Story → Why you need photos when you sell your story