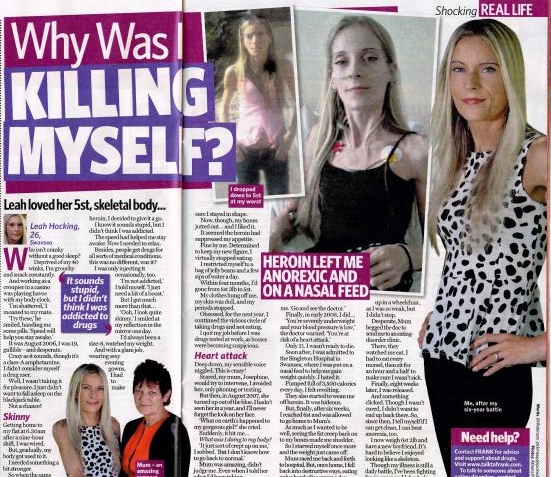 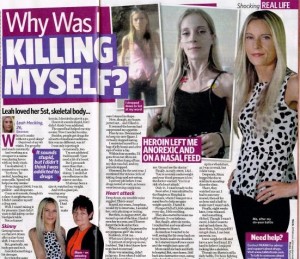 If you’re in the newsagent this week, grab yourself a copy of Pick Me Up, where you’ll see our story with Leah Hocking, who has finally turned her life around after a difficult battle with drugs and anorexia.

When Leah turned 19 she got in with the wrong crowd and started doing recreational drugs. Her life spiralled out of control and she ended up on speed and heroin. Leah’s weight plummeted from 8 stone 3lbs 5 stone 6lbs in the grip of her addiction. Her BMI was dangerously low as 12.3.

The drugs suppressed her appetite, but there was another problem. Leah liked looking skinny. In 2010, Leah went to a drugs clinic and was put on methadone script to wean her off heroin. After she came off the drugs, her anorexia got worse. She feared putting on weight and would only eat a small bowl of ice cream a day.

She constantly felt dizzy and tired and would often suffer from black outs. Leah says every bone in her body was protruding and it even hurt to sit down without a pillow underneath her. In June 2011 she was admitted into hospital. Her weight was 5 stone four and she was nasal fed for six weeks.

Unfortunately, she didn’t receive the psychological help she so desperately needed and was discharged when her weight reached 6 stone. As soon as Leah, who’s five ft6, was back at home she resumed her old eating regime. She cut out the ice cream and was surviving off two sweets a day.

She wouldn’t even drink water as she was terrified it would make her put on weight so she limited her in take to a few sips a way. Within weeks, she was back in her local hospital and had to be force fed again. She became so ill that she couldn’t walk properly or string a sentence together.

Her mother was so concerned that she made Leah’s GP send her to a food eating clinic in Marlborough. She wanted her to receive proper psychological help – not just force fed to put back on the weight. She stayed there for eight weeks and was taught how to eat again. Unfortunately, Leah says she still didn’t receive any counselling.

She’s been recovering for six months and is now seven stone. She’s written a food plan and makes sure she sticks to it. Every day she goes round her mum’s house and she cooks for her and watches her eat it.

‘I’m starting to feel like my old self again,’ says Leah. ‘It hasn’t been an easy journey and the anorexia has ruined my body. I’m speaking out as I’d like to help other sufferers.’

If you’ve been through a difficult journey and come out the other side, email us on message@talktothepress.com or fill out the sell my story form on the right.