Have you got a strong thoughts on a topical subject? Earn money sharing your opinion with the press 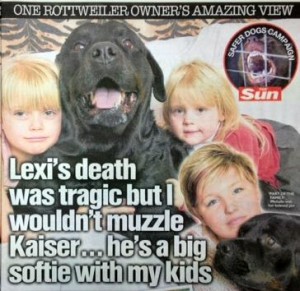 If you’ve got strong thoughts on a topical subject, let us know as we can help you earn money sharing your opinion. The national newspapers and women’s magazines we work for are always looking for people to offer debate and their own views around topical subjects.

Michelle Scoffings says strangers give her ‘dirty looks’ and cross over the street when they see her walking her 12 stone Rottweiler, Kaiser. On top of this, takeaway deliverymen are terrified to drop food off at the house and vets refuse to treat the dog unless he’s in a muzzle. But despite his intimidating appearance, Michelle believes Kaiser, now nine, would hurt and fly and resent the fact Rottweilers and other ‘dangerous dogs’ get such a bad press. She says she happily leaves Kaiser around her six children Rebecca, 14, Liam, 13, Jessica, eight, Cameron, six, Erika, four and Abigail, three.

As yet another British child, four-year-old Lexi Branson, is tragically killed after the family’s pet rescue pitbull ‘switched’ and mauled her to death in her bed, and dangerous dog campaigners are calling for such dogs to be muzzled around children, Michelle wanted to stick up for the breeds that are labelled ‘dangerous’.

Michelle says she’d NEVER muzzle Kaiser and believes dogs aren’t born dangerous but, like humans, their environment shapes them. ‘I will never muzzle Kaiser,’ says Michelle, 35, a carer, from Chesterfield. ‘He’s a big softie and although most people judge him at first, they quickly realise once getting to know him that he would never harm anyone. He’d rather lick you than attack you.’

She says the secret to a happy dog is to keep them well fed and exercised and give them their own personal space. She says she would never dream of having a dog in a small flat with no garden. Despite strangers being ‘petrified’ of Kaiser she says that when they get to know him they realise how gentle he is.

She says: ‘I feel completely fine about him being around the kids, he’s never shown any violent side and I know he never will. If a law is brought in to muzzle dogs around children of a certain age I’ll ignore it.’

We arranged for Michelle to share her thoughts with the Sun newspaper, where her interview appeared as a double page.

If you’ve got strong thoughts on a topical subject, and would like to earn money sharing your opinion, email us on message@talktothepress.com or fill out the sell my story form to the right.

Talk to the Press
← Previous Story Sell story to Bella magazine: we secure Natasha Pilter deal for her story about securing justice after being abused by her family GP
Next Story → Do you want to be on This Morning? TTTP’s Emily escorts our client Lucy Banks onto the This Morning programme