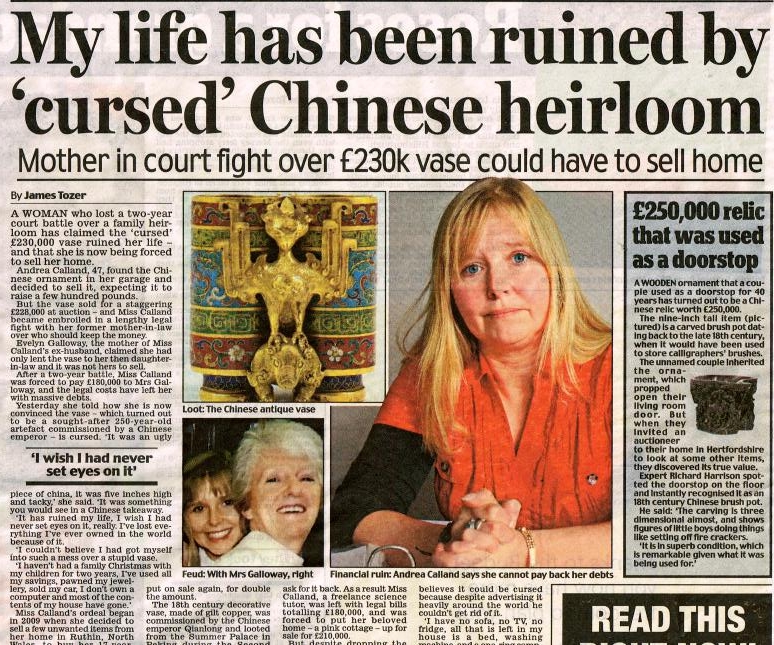 In 2011, Andrea Calland found herself making news headlines after losing a landmark legal battle with her mother-in-law over the rights to a £228,000 Chinese vase. Two years earlier, Andrea had decided to sell the ‘ugly’ ornament which she’d used to burn incense and then had kept in the boot of her car along with other ‘bric a brac’ at auction to buy her daughter a new laptop, but never expected it to make more than a few hundred pounds.

However to Andrea’s astonishment the vase far exceeded its reserve price of £500 when an antiquities dealer bought it for £228,000.

After reading about the sale in the local paper her mother-in-law Evelyn, 74, claimed the vase belonged to her and she had merely loaned it to her daughter-in-law while she had been married to her son Steven, the father of Andrea’s now adult children.

Andrea lost her case and her mother in law was allocated the proceeds of the vase. But the story did not end there.

We helped Andrea handle the press attention at the time, and this week, she got back in touch with the update to her story. She wanted to reveal how for the past two years she has remained embroiled in legal battle and today she truly believes the vase is cursed.

She launched an appeal against the court’s ruling, which she has also just lost and is now set to lose her home. She has sold everything she owns, including her cooker and fridge and faces financial ruin. What is worse, is she says that the Chinese art dealer who bought the vase also believes it is cursed and the ongoing legal fight has caused a bitter rift in her family.

Andrea says: ‘It’s like a piece of awful tack you’d see in a Chinese restaurant, but it has ruined my life and that of my entire family.’

Naturally, given Andrea’s story made headlines at the time, the newspapers were interested in an update in Andrea’s ongoing battle. We secured Andrea coverage in a number of papers and helped her get publicity in the press.

If you’ve got a story you’d like to sell, or you want to get publicity in the press, email us on message@talktothepress.com or fill out the sell my story form to the right.