Justice after abuse: our brave client shares her story with Take a Break magazine 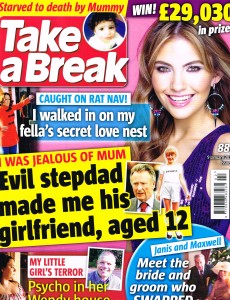 As soon as we heard Deborah Kettle’s courageous story of getting justice after abuse, we knew a magazine would be interested in interviewing her. Deborah, now 36, was groomed and abused by her evil step dad as a child, to the point where she became jealous when he lavished attention on her mum. She finally found the courage to report the abuse 20 years on, and thankfully, vile Christopher Redfern has now been sent to prison.

Although Deborah used to live with her biological father in Somerset, during the holidays she would visit her stepfather, mother and two brothers in Devon during the summer holidays – and this is where the abuse took place. Redfern used to give Deborah unofficial driving lessons when she was eight on land where he was living at Cadeleigh, near Tiverton, more than 20 years ago.

During the lessons he would pull over to laybys and sexually assault Deborah. The abuse got worse until Redfern forced Deborah to give him oral sex and paid her £15 afterwards, telling him she was his special girl. At the age of 13 the vile sex beast raped his step-daughter while she was alone in the house.

An electrical company director, Redfern, of Angel Hill, Tiverton, initially denied rape and seven offences of indecent assault or gross indecency. All the offences date back to the 1980s or 1990s, when Deborah was just a child. But in June last year, he was found guilty of rape and seven offences of sexual assault of gross indecency. He was sentenced to 15 years in prison at Exeter Crown Court.

Brave Deborah decided to waive her right to anonymity in a bid to help other victims come forward in historic cases.

In 2012 Deborah heard that Redfern was planning a trip to Thailand. She couldn’t stand the thought of him abusing other young girls and found the courage to go to the police. He was arrested in 2012, and denied all charges saying that Deborah was infatuated with him when she was a teenager. Deborah gave evidence from behind a screen because she couldn’t face her abuser. Redfern was found guilty of rape and seven offences of indecent assault or gross indecency at Exeter Crown Court in June 2013 and sentenced to 15 years in prison.

But the emotional damage has stayed with Deborah, who is now a mother of three. The full-time mum’s marriage broke down in 2010 because she was terrified her husband would abuse her daughter’s friend who came round to play – even though she admits these thoughts were completely irrational, she just couldn’t trust another man.

She says, ‘I hate Redfern for what he did, he stole my childhood. I got pregnant with my first boyfriend at 15 because I was sexualised early because of his grooming. ‘When you at that age you are a blank canvas, and he groomed me knowing I was vulnerable and essentially turned me into a prostitute for his own sexual needs. When he was sentenced I didn’t celebrate, I was happy but it wasn’t a time for celebrating. I feel like the judge who put him away has given me my childhood back, it is an overwhelming feeling.

‘I want other victims of abuse to come forward and tell the police, it may seem scary but it isn’t as bad as it seems. It’s a relief to finally know I wasn’t the one to blame for everything that happened.’

If you’ve secured justice after abuse and would like to share your story to inspire other women to do the same, email us on message@talktothepress.com or fill out the sell my story form on the right.