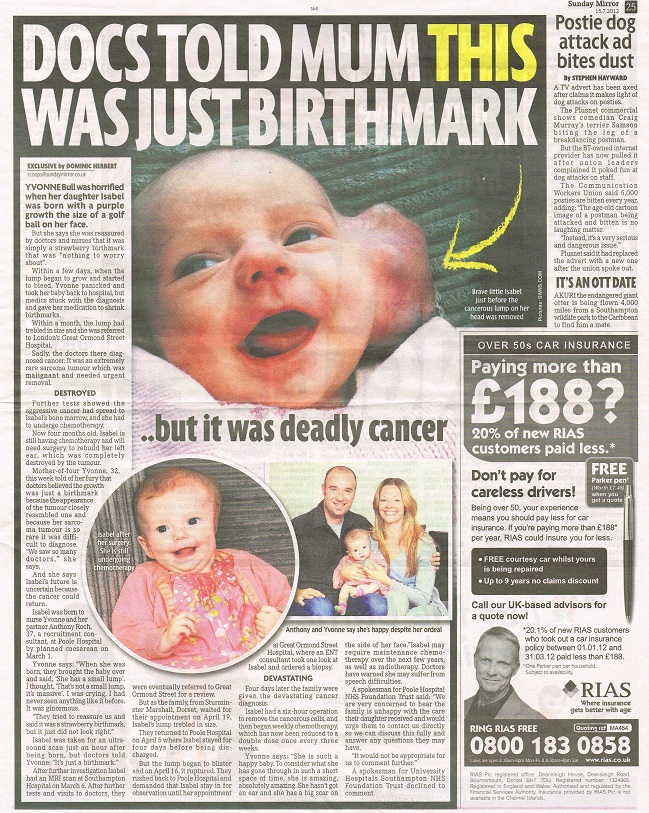 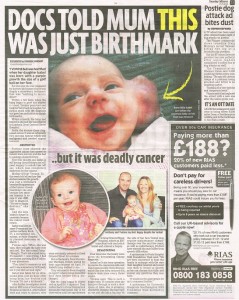 This week, Yvonne Bull’s story appears in the Sunday Mirror and Daily Mail, where she tells how no less than twenty doctors told her that a huge growth on her newborn daughter’s face was an innocent birthmark.

Shockingly, the ‘birthmark’ was in fact a deadly form of cancer which would have killed baby Isabel if left untreated. It was only detected after Yvonne repeatedly brought her daughter to hospital and demanded a second opinion when the lump trebled in size.

A month later Isabel was diagnosed with an aggressive form of cancer by doctors at Great Ormond Street hospital and the tumour was removed immediately. But it was found to have spread to her bone marrow and Isabel is still undergoing chemotherapy.

Yvonne, 32, and her partner Anthony, 37, are furious that their local hospital didn’t detect the tumour earlier and are now planning to take legal action.

Meanwhile the future is uncertain for Isabel, who is now four months old, as the cancer could return at any point.

Yvonne says: ‘She’s such a happy baby. To consider what she’s gone through in such a short space of time, she is amazing. We’re just furious doctors didn’t pick up on it earlier.’