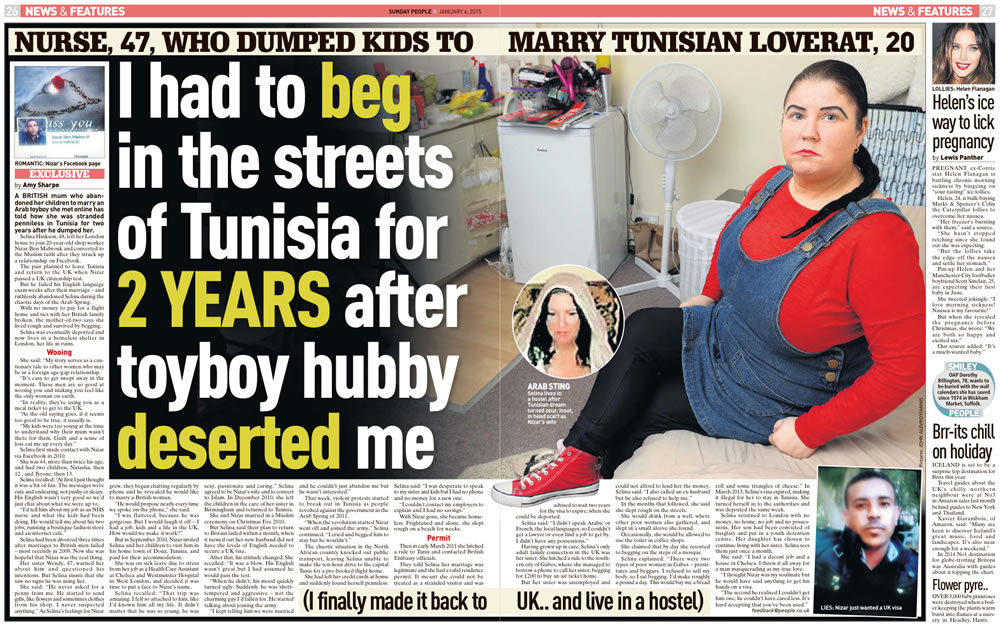 Tunisian loverat turned me into a street beggar!

Have you been scammed by a foreign toyboy and want to warn other women about the dangers of age gap relationships? Read Selina Hinkson’s story below…

Selina Hinkson, 48, left her London home to join 20-year-old shop worker Nizar Bemnabrouk and converted to the Muslim faith after they struck up a relationship on Facebook…

The pair planned to leave Tunisia and return to the UK when Nizar passed a UK citizenship test. But Tunisian Loverat Nazir failed his English language exam just two months after their marriage and abandoned Selina during the chaotic days of the Arab Spring.

She claims she was homeless on the streets of Tunis, the country’s capital. With no money to pay for a flight home and ties with her British family broken, the mother-of-two slept on a beach and survived off hand outs.

Selina was eventually deported and now lives in a homeless shelter in London, her life in ruins. She said: “My story serves as a cautionary tale to other women who may be in a foreign age gap relationship.

“It’s easy to get swept away in the moment. These men are so good at wooing you and making you feel like the only woman on earth. In reality, they’re using you as a meal ticket to get to the UK. As the old saying goes, if it seems too good to be true, it usually is.”

“My kids were too young at the time to understand why their mum wasn’t there for them. Guilt and a sense of loss eat me up every day.”

Selina first made contact with Nizar when he added her as a Facebook friend in 2010. She was 44, more than twice his age, and had two children, Natasha, then 13, and Tyrone, then 12.

Selina recalled: “At first I just thought it was a bit of fun. The messages were cute and endearing, not pushy or sleazy. His English wasn’t very good so we’d just chat about what we were up to.” As Selina’s feelings for Nizar grew, the pair began messaging over Facebook every day. Within three months, they started to chat on the phone.

Selina discovered that Nizar’s English wasn’t strong enough to sustain much of a conversation. But he did drop hints about he would like to marry a British woman. In September 2010, eight months into their online romance, Nizar ­invited Selina and her children to visit him in his home town of Douz, Tunisia and paid for their accomodation.

She was on sick leave from her job as a Health Care Assistant at Chelsea and Westminster Hospital because she was suffering from stress. So she decided to use the time off to put a face to Nizar’s name.

In December 2010, she left the children in the care of her sister and flew to Tunisia. She and Nizar married in a Muslim ceremony on Christmas Eve 2010. But Selina said their plan to return to the UK failed in their first month together, when her new husband didn’t have the levels of English required to secure a visa.

And soon after, his attitude changed. She recalled: “It was a blow. We had pinned our hopes on returning to the UK together. His English wasn’t great but I had assumed he’d pass the test. When he didn’t, his mood quickly turned ugly. Suddenly he was short-tempered and aggressive with me – not the charming guy I’d fallen for. He started talking about joining the army, which he’d never mentioned before.”

Nazar left her to join the army as people revolted against the government in the Arab Spring of 2011. With Nazar gone, his family turfed Selina out. Her family had turned their backs on her at home and Selina was left penniless. She spent the next two years begging on the streets and relying on hand outs from kind passers-by.

In March 2013, Selina’s visa expired. She became an illegal immigrant in Tunisia and turned herself in to the authorities. She was immediately thrown in a cell before being driven to the capital, Tunis and deported that week. Selina returned to London with no money, no job and no possessions.

When she was reunited with her children and sister after more than two years, they were furious. While she has been away her son had been convicted of burglary and placed in a youth detention centre. Her daughter is happy living with Selina’s sister and has no desire to live with her mother again.

Initially the rest of her family felt abandoned by Selina but slowly they are starting to rebuild bridges. Selina is now staying at a homeless hostel in London and relies on support benefits. She said: “I had a decent job with the NHS, I had a house in Chelsea, and I threw it all away for a man who was masquerading as my true love.”

She added: “I honestly thought Nizar was my soulmate. Now I realise he would have said anything to get his hands on a visa. And the second he realised I couldn’t get him one he couldn’t have cared less. It’s hard accepting that you’ve been used.”

We placed Selina’s story with The Sunday People and we are now in the process of securing her a magazine deal.

If you’ve been burned by a toyboy, con-artist or confidence fraudster, fill out the ‘two minute story form’ to the right or email message@talktothepress.com We’d love to help you share your story and warn others in a similar situation. You can read more about selling your story to the highest bidding magazine here: https://www.talktothepress.co.uk/sell-my-story

Talk to the Press
← Previous Story Do you want maximum coverage in the press, but to stay in control?
Next Story → When Outdoor Sex goes Wrong!