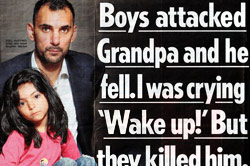 Talk to the Press was specifically founded with the aim of helping ordinary people caught up in the media spotlight and we did just that when Arfan Haque got in touch with us asking for help managing press attention in his life. We secured him a double deal with two newspapers: the News of the World and the Mail on Sunday, and he also appeared on This Morning.

Arfan hit the headlines when two teenage boys were jailed for killing his father in a violent ‘happy slapping’ attack outside a mosque in South London which took place in front of his four-year-old granddaughter Mariam. Arfan also appeared on This Morning.