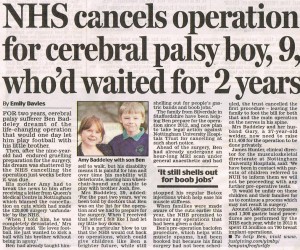 For the past two years, little Ben Baddeley has been waiting for an operation that will help him to walk without being in pain. And just weeks before the operation was due to go ahead, it was cruelly cancelled by the NHS.

As soon as we heard about the family’s situation, we knew we could help them raise money, and speak about their anger that other ‘less needed’ operations continue to be funded by the NHS.

We got their story published by the Daily Mail today – and in less than one day, the newspaper’s generous readers have donated £6000k. Incredible, this is already over half the amount he needs to have the operation privately.

Ben was born with cerebral palsy, a neurological condition, which causes physical disability in development, muscle tone, posture and coordination.

But last month his mother Amy Baddeley, 29, a housewife from Silverdale in Staffordshire received a letter in the post to say his operation, which she had believed would take place this month, had been cancelled by NHS England because of lack of funding.

Now the family have to raise £11,400 to fund the surgery privately before Ben’s 10th birthday in June.

Mrs Baddeley says: ‘For the past two years, we’ve been told by doctors that Ben was on the list for the operation and we had to prepare for the surgery. When I received that letter I felt like I had let my little boy down. All the preparation we had done was pointless.’

‘Ben has been prodded and poked so many times and even been put under general anaesthetic – what for? We’ve even stopped his botox treatment for his condition for the past two years by hospitals instructions, all in the preparation for the operation. That means that last two years have been made worse and more painful for Ben, but we thought it would be ok because we could see light at the end of the tunnel.’

‘We had prepared for this day for two years and now it has been cruelly taken away from us. Meanwhile, the NHS still shells out for boob jobs and gastric bands.’

To help Ben fund his operation please search for ‘Help Ben Get His Op’ on Facebook or visit www.justgiving.com/yimby/benpainfreeforlife to donate.