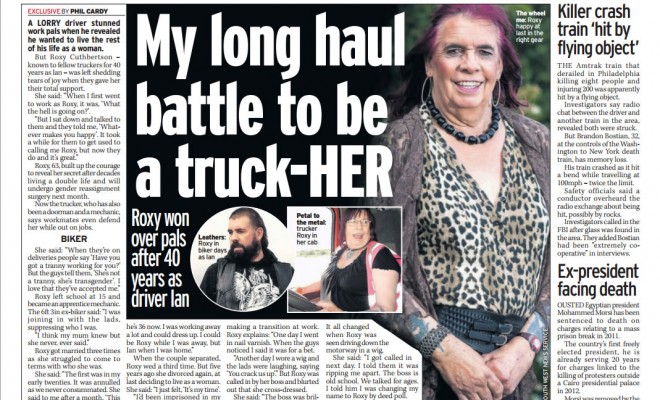 Refer a friend who has a story to tell, and we’ll pay you!

Do you have a friend with an interesting story to tell? Have you been urging them to share their story with the world? We rely on people like you to spread the word, so you can earn quick and easy cash through our ‘refer a friend’ scheme.

Last month we helped Roxy Wallace get her incredible story out there. Incredibly, 50-year-old Roxy used to be a burly bodyguard named ‘Bob’. Unhappy in himself, Bob suffered from such severe depression he never played with his son William, now nine.

But one day cross-dressing Bob finally opened up to wife of 20 years Jo, and said he wanted to live as a woman called Roxy.

Ever since, Roxy, now a stay-at-home mum, has had a better relationship with William, who is on the autistic spectrum, because living as a woman has helped her beat her battle with depression.

We placed Roxy’s story with The Daily Mirror – where it appeared on the front page. Roxy was so chuffed with the press coverage we secured for her she referred us to her pal Roxann Cuthertson.

Lorry driver Roxann – known to trucker pals as Ian for years – was left shedding tears of joy when work-pals showed their total support after he announced he wanted to become a woman. Roxann, who has been driving HGVs for 40 years, built up the courage to reveal her gender transition after living a double life for decades.

Now Roxann – who has also worked as an apprentice mechanic and a doorman – said her workmates even defend her while out on jobs. She said: “When they’re making deliveries people say things like ‘have you got a tranny working for you?’ But the guys tell them ‘she’s not a tranny, she’s transgender’.

“I’ve talked to them about it, it’s all about educating people, and I love the fact they’ve accepted me.”

How can Talk to the Press get you the best coverage for your story?

After speaking to Roxann, we placed her story exclusively with The Sunday Mirror.

Once we had placed the story in the Sunday paper we syndicated it on the news wire – so a number of national publications online could run the story afterwards. We’re now in the process of securing Roxann a magazine deal and we’ve also received a lot of interest from television programmes and networks. Daytime TV shows have also shown a lot of interest in Roxann’s story so watch this space!

How can I refer a friend?

If you have told a story with us before and you were happy with our service, and you have a friend who would like to share their story, refer them to us to earn quick and easy cash. Payment will depend on the type of story you refer to us (prices vary) but you won’t be disappointed.

Either speak to the writer who was representing you, or you can get them to call us on 0207 549 5406. Alternatively, you can complete the form on this page and tell us a little bit about the story; one of our team will get right back to you.

If it’s a story we can help with we will pay you upon publication – that fee will depend on how big the story appears and which publication it goes to. We will get back to everyone who refers us to a family member or friend, regardless of whether we can help or not.

We looking forward to hearing from you!

For more information about the story selling process, you can visit the SELL MY STORY page. You can also see some of our recent client’s stories below:

Georgette Culley
← Previous Story Extreme career change!
Next Story → Sell a story about my accident: Talk to the Press