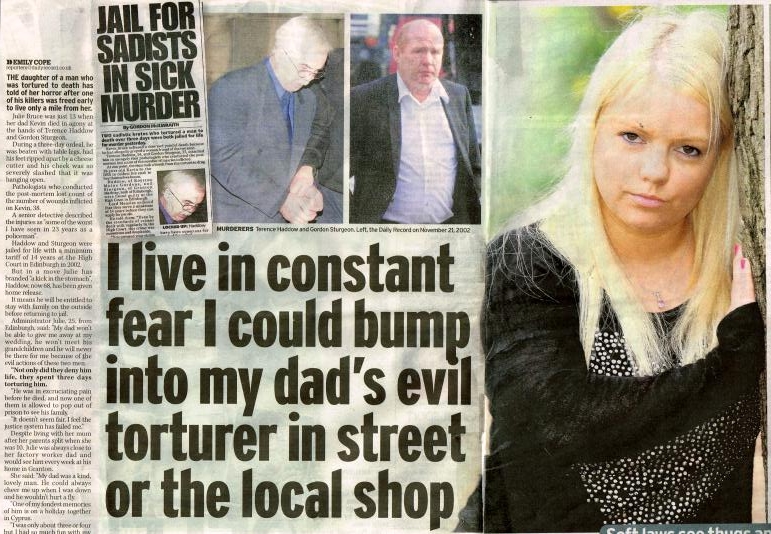 When Julie Bruce was just 13-years-old her dad was tortured and murdered by two of his ‘friends.’ In a crime that made headlines, Kevin Bruce was tortured for three days and died in agony after he was beaten with table legs and his legs and feet were ripped apart by a cheese cutter, while his cheek was so severely cut it was hanging open.

The 38-year-old was also found in his Edinburgh flat in 2002 with fractured ribs, and a judge at the high court said he would have died in ‘excruciating pain’. During the three days of torture, Terence Haddow and Gordon Sturgeon also drove Kevin to the DSS to get his money, and then used it to buy alcohol for themselves. Haddow and Sturgeon assaulted him so savagely that pathologists who conducted the post-mortem lost count of the number of injuries inflicted.

Julie had always been a daddy’s girl. Despite her parents having broken up, Julie would still see her dad every week for lunch. On the Thursday that Kevin was abducted, Julie waited two hours for him, but he never showed up. Julie was instantly worried because her father had always been excited to see her every week and she says she’ll never forget the day that the police came to her door to tell her family what had happened.

Devastated at the loss of her father in such an inhumane way, Julie wanted justice to be served. Haddow and Sturgeon were sentenced to life in prison at Edinburgh Crown Court with a minimum of 14 years. At the time Julie believed that life in prison meant life in prison, and she was satisfied justice had been done. But she got in touch with us to sell her injustice story after she discovered one of her dad’s killers had been released before the minimum term.

She tried to move on with her life, finished school and began working as an administrator. But thoughts of her father were never far from her mind. In 2013, still plagued by the trauma of her father’s brutal death, she signed up to the victim notification scheme so that she would be notified if anything happened to Haddow or Sturgeon. She was informed that they were both still behind bars.

But in February 2014 she was notified that Terence Haddow had been given first term release – meaning he will be entitled to leave prison and stay with family for a period of time before returning back to prison. Julie says it felt like a ‘kick in the stomach’ when she discovered that the man who tortured her dad for three days was entitle to go home, especially when his home address is just one mile from where she lives now.

She says: ‘My dad won’t be able to give me away at my wedding, he won’t meet his grandchildren and he will never be there for me because of the evil actions of these two men. Not only did they deny him life, they spent three days torturing him. He was in excruciating pain before he died, and now one of them is allowed to pop out of prison to see his family.

We secured Julie coverage for her injustice story in a newspaper. If you’ve experienced an injustice and would like to sell your story, email us on message@talktothepress.com or fill out the sell my story form on the right.

Talk to the Press
← Previous Story TTTP secures book deal for client – due for publication on April 24th.
Next Story → The greatest gift of all – our client Jennifer in Woman’s Own magazine