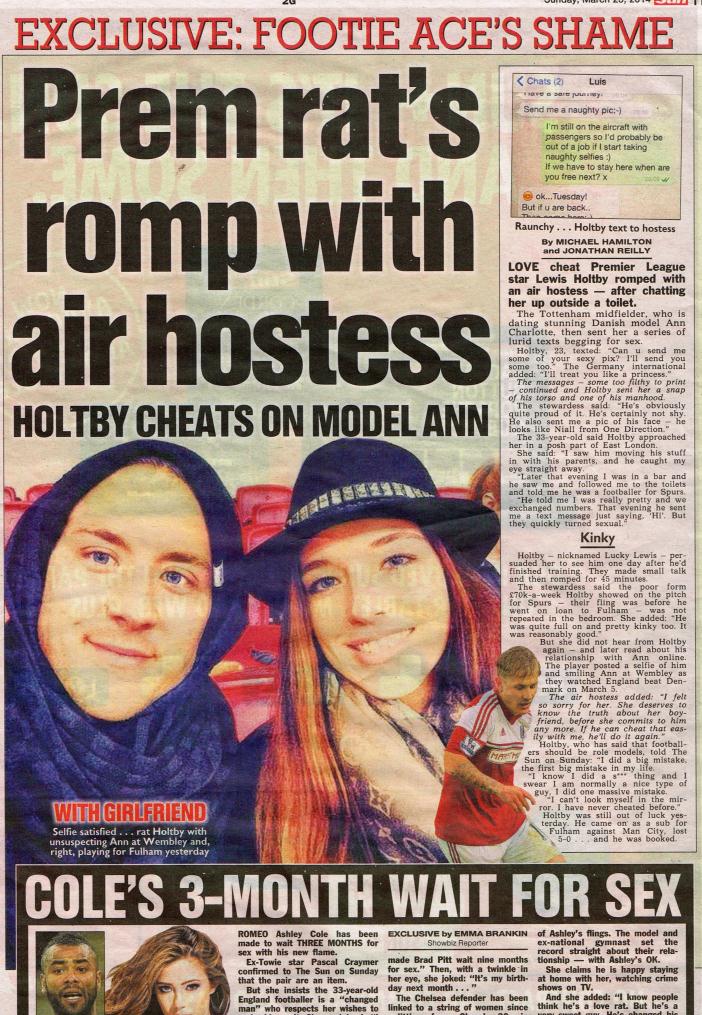 When an air hostess got in touch to sell a kiss and tell story about her encounter with Tottenham player Lewis Holtby, we knew a newspaper would be interested. We were also able to keep the air hostesses identity anonymous, which is something that was really important to her.

The story appeared in this week’s Sun on Sunday newspaper.

In the story, she told how love cheat Tottenham player Lewis Holtby romped with an air hostess – after chatting her up outside a toilet and sending her lurid texts begging for sex. Holtby, who is dating stunning Danish model Ann Charlotte, showed his form for playing away when he approached the stewardess, told her she was pretty and they exchanged numbers.

Wasting no time Holtby –on loan at Premier League strugglers Fulham –sent the hostess snap of himself, and begged her to send him “sexy pix”.

As the pair exchanged flirty messages, Germany player Holtby said: “I bet u are up for some d**k.” The messages continued and Holtby – pictured at Wembley with stunning Ann on March 5 as England beat Denmark – sent her a snap of his torso, followed by one of his manhood.

Recalling how Holtby approached her in Canary Wharf, East London, the petite 33-year-old revealed that he chatted her up outside the toilet in a bar. She explained: “I saw him moving his stuff in with his parents, and he caught my eye straight away. Later that evening I was in a bar, and he spotted me and followed me to the toilets and told me straight away he was footballer for Spurs. He told me I was really pretty and we exchanged numbers. That evening he sent me a text message just saying ‘hi’. But they quickly turned sexual.”

Holtby – dubbed “Lucky Lewis” – persuaded her to see him one day after he’d finished training. The pair made small talk – and then romped for 45 minutes. But once the passionate tryst was over, she did not hear from Holtby again, and later read about his relationship with Ann online.

The air hostess added: “I just felt so sorry for her. I think she deserves to know the truth about her boyfriend, before she commits to him anymore. If he can cheat that easily with me, he’ll do it again. I got the impression it was something he did on a regular basis, as he didn’t really give it a second thought.”

On the phone, the £70,000 per week player said: “I did a big mistake, the first big mistake in my life. I know I did a s***, s*** [shit] thing and I swear I am normally a nice type of guy, I did one massive mistake. Please give me one chance, I’m begging here, I can’t tell you, seriously I can’t look myself in the mirror any more. I’m not the type of guy that goes partying and does stuff like that. But I’ve made one big mistake.”

If you’ve got a kiss and tell story you want to sell, email us on message@talktothepress.com or fill out the sell my story form to the right. Kiss and tell stories are never straightforward, but we’ll be able to guide you through the entire process.