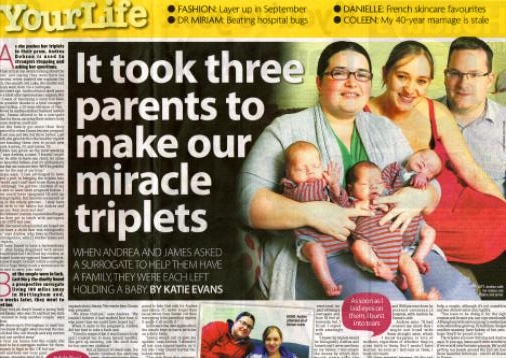 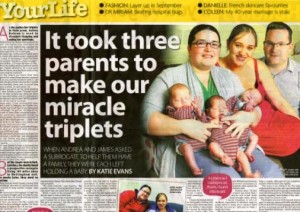 Andrea, 33, and her husband James, 35, from Cambridge, are celebrating the arrival of their triplets Luke, Alexander and William, who were born two weeks ago.

But for Andrea, the fact she has triplets is nothing short of miracle – because just a year ago she didn’t know if she would ever have children. And today, they share their heartwarming story with the Daily Mirror newspaper.

Andrea had wanted a family but her life was turned upside down when she was diagnosed with severe endometriosis and polycystic ovaries. In 2010, at the age of 31, Andrea had a hysterectomy. She was devastated and feared her dreams of having a child could be over. That’s when Andrea and James started looking into surrogacy. They got in touch with the surrogacy charity COTS, who put them in touch with a prospective surrogate.

Emma, 25, a mum-of-two from Nottingham, agreed to help them. In May last year Andrea and James went to meet Emma in her hometown of Nottingham to find out more about her. Andrea says they clicked immediately and she knew she wanted Emma to be their surrogate as she seemed genuinely keen to help others.

Although Andrea had undergone a hysterectomy, she still had both her ovaries, and doctors were able to successfully collect her eggs and fertilise them with James’s sperm, which meant the resulting embryos would be biologically theirs. Emma says she always knew the babies were not hers, and she was merely the means by which they would come into the world. She knew she couldn’t get emotionally attached to them.

In December last year two fertilised embryos were implanted into Emma, so both Emma and the couple knew there would be the possibility of twins. But they were all shocked when, at Emma’s 16 week scan, the midwife spotted three babies on the monitor. One of the embryos had split, creating twins.

For the couple, it was more than they could ever have dreamed of, when just a year earlier they had doubted whether they would ever have children. Over the nine months, they built up a firm friendship. Andrea would regularly make the four hour round trip to Nottingham to attend scan appointments with Emma.

Finally in July this year the babies were born by planned caesarean, with Andrea by Emma’s side throughout the delivery. Three days later, Andrea and James returned to Cambridge with the babies, and they are now a month old and doing brilliantly.

If you’ve become a parent against all odds and would like to share your story with the Daily Mirror, or any other newspaper, fill out the sell my story form to the right, or email us on message@talktothepress.com

Talk to the Press
← Previous Story Courage of the identical twin who embraces baldness, whilst her sister retains a full head of hair
Next Story → Our agony over whether to terminate our disabled child