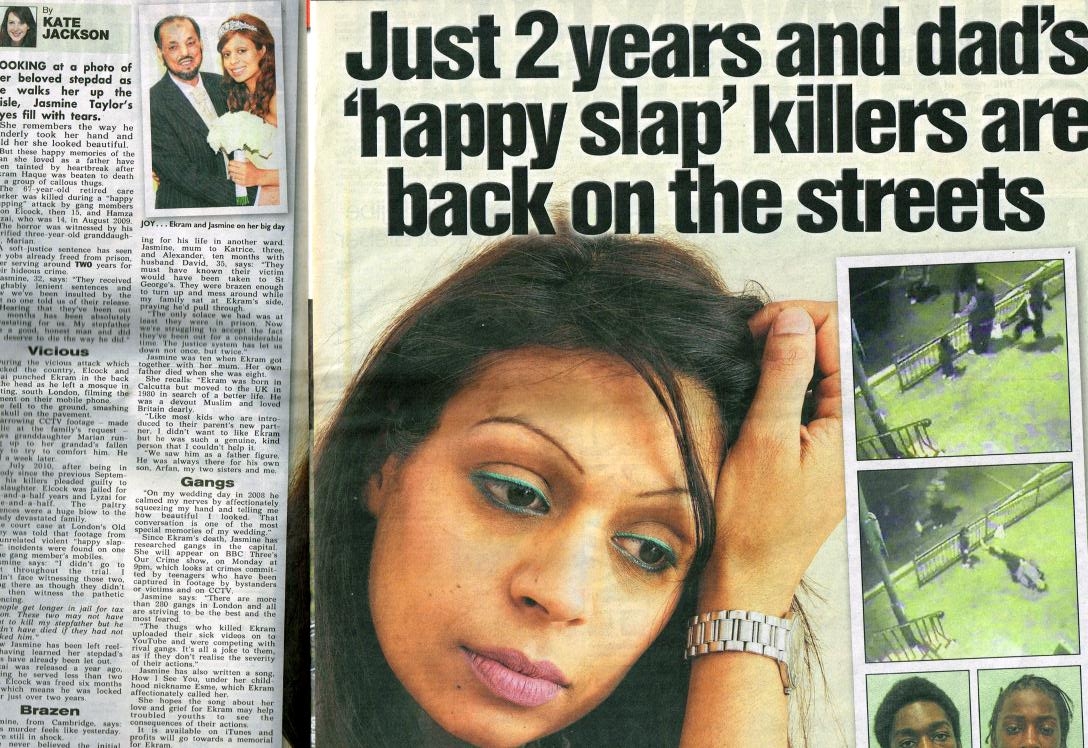 In 2009, Jasmine Taylor, 32, was devastated when she lost her beloved stepfather, Ekram Haque, 67, in a senseless ‘happy slapping’ attack which made national headlines.

Leon Elcock, then 15, and Hamza Lyzai, then 14, punched retired care worker Ekram in the back of the head when he was leaving a Mosque in Tooting with his granddaughter Mariam, three, in an unprovoked attack. Ekram fell to the ground, smashing his skull on the pavement. Harrowing CCTV footage retrieved by the police showed the killers running off laughing as a terrified Mariam tried to console her dying Grandad.

This week, we arranged for Jasmine to share her story exclusively with the The Sun. She feels let down by the justice system after discovering Ekram’s killers are already back on the streets having served a mere two years in prison.

‘The thugs who killed my stepfather uploaded their sick videos onto Youtube,’ revealed Jasmine, who lives with her attorney husband, David, 35, and their two young children in Cambridge. ‘They’ve never shown any remorse for their actions so I very much doubt they’ve been rehabilitated. My family and I will have to live with this for the rest of our lives. Ekram was a wonderful man and did not deserve to die such a terrible, pointless death. We feel very let down.’

Jasmine will soon be appearing in a women’s magazine. If you’ve been let down by the justice system and would like to share your story with a newspaper, email message@talktothepress.com

Talk to the Press
← Previous Story I forgot the man I loved – this week’s Love it! magazine
Next Story → My ex tried to blow me up with a home-made petrol bomb