Sell story to Bella magazine: we secure Natasha Pilter deal for her story about securing justice after being abused by her family GP 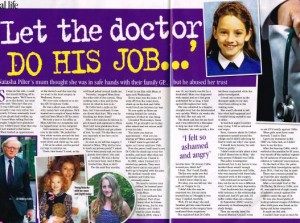 When Natasha went to her GP she thought she was in safe hands. But she couldn’t be more wrong. In a story that made national news, disgraced Dr Anthony Collis abused five children under the age of 14 and in some cases their mothers were sat just feet away when the abuse took place.

Natasha Pilter, now 25, from Surrey, was one of those victims and this week, her story appears in Bella magazine.

Disturbingly, sick Collis sexually abused Natasha behind a curtain between the ages of eight to 12 whilst her unwitting mother was in the room. The first time, the girl shouted out in pain and her mother told her to ‘let the doctor do what he had to do’.

In Court, it emerged the sick doctor chuckled to himself as he continued to touch her inappropriately.

Over a four year period, he continued to examine her naked from the waist down and touch her inappropriately – despite the fact she was suffering from a suspected bout of Glandular Fever.

In June 2011, after an eight year investigation, Collis, then 59, who was married with three grown up children and lived in a £600,000 detached property in the leafy village of Stonegate, was found guilty of eight counts of indecent assault and possessing two indecent images of children.

He was sentenced to eight years and 10 months in prison and has been struck off. Brave Natasha has chosen to waive her right to anonymity to help other victims come forward.

Despite a number of allegations being made against Collis in 2003, the CPS didn’t believe there was enough evidence to prosecute Collis. Police only took action in 2007 following the General Medical Councils decision to remove Collis from the Fitness and Practise Register, Sussex police decided to reopen the investigation.

Because of this Natasha says the case hung over her for years and blighted most of her childhood and early 20s. ‘Still to this day I don’t trust doctors and fear GPs and hospitals,’ says Natasha, who was one of the main witnesses in the two week trial at the Old Bailey. ‘He abused his position of trust and abused me when my mother was in the room. It’s beyond sick.’

We knew a women’s magazine would be interested in Natasha’s courageous story and we helped her secure a deal with Bella magazine.

Sell story to Bella magazine? If you’d got a story you’d like to share, email us on message@talktothepress.com or fill out the sell my story form to the right.

Talk to the Press
← Previous Story TTTP helps Holly Thorogood sell her story to the Sunday Mirror newspaper
Next Story → Have you got a strong thoughts on a topical subject? Earn money sharing your opinion with the press