We help brave mum Gemma sell her story to Chat magazine, following brutal attack on her own doorstep 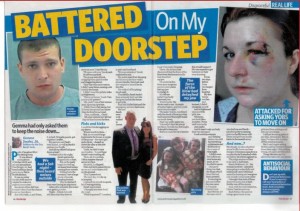 When mum Gemma Swale heard shouting outside her house in Cleeveland at midnight one evening, she went outside to ask a group who had congregated there to move away. But to her boyfriend’s horror, Gemma and her sister, Sarah, were turned on by the gang.

They chased the sisters and beat Gemma to a pulp with a baseball bat before leaving her for dead. Her body was drenched in blood and her injuries so severe that her boyfriend, Paul Briggs, 25, a plumber, couldn’t recognise her and thought she was dead.

In August 2013, Karl Stubbs, 20, received six and a half years in prison after pleading guilty to grievous bodily harm to the sisters.

Incredibly, during court it emerged the six-footer had punched another woman whilst he was on bail and pleaded guilty to actual bodily harm and two charges of common assault. As soon as Gemma got in touch, we knew there would be interest in her shocking story, and we secured her a deal with Chat magazine.

Today, Gemma, a mother of two, is still trying to move on from the horrific attack which has ‘changed her life forever.’ After the attack, Gemma was rushed to hospital and underwent an emergency operation on her face. Her jaw had been broken in two places and was ‘hanging down’. She had two steel plates inserted into her jaw to realign it. Her left eye socket was fractured and doctors told her she was lucky she wasn’t blinded in the attack. She remained in hospital for two days before she was released home on liquid morphine, sleeping tablets and anti-depressants.

Gemma says she was terrified to be in the house and afraid of her own shadow. Overnight, she went from being an outgoing person to a shell of her former self. Gemma could barely talk and was on a liquid diet for six weeks following the attack. She says she looked like a monster and couldn’t bear to look in the mirror. Some days she’d wake up not wanting to live.

She struggled to be a mother to her beloved girls, Faith, five, and Freya, now three. The family moved out of the area following the attack as Gemma was terrified Stubbs would hunt her down and return. In August last year, Stubbs was jailed for six and a half years for the attack. Incredibly, he punched another woman in the face whilst on bail. Although Stubbs’ defence lawyer released a statement claiming how sorry Stubbs was for the attack, Gemma says she doesn’t believe he feels any remorse.

‘How could he?’ says Gemma, 26, a full time mum from Saltburn, ‘he laughed when he left me for dead and continued to attack other innocent people when he was on bail. He’s a monster who has no respect for life. Who beats a mother to a pulp in an unprovoked attack?

‘I used to love dressing up and taking an interest in my appearance but he’s ruined my looks and changed my life forever.’

If y ou’ve got a story you want to share, or you want to sell story to Chat magazine, email us on message@talktothepress.com or fill out the sell my story form on the right.

Talk to the Press
← Previous Story Ultimate betrayal story – robbed by my best friend of 26 years, read our client’s story in this week’s @chatmagazine
Next Story → ‘Talk to the Press is a highly professional press agency’ – says mum campaigining to uncover the truth about her son’s tragic death