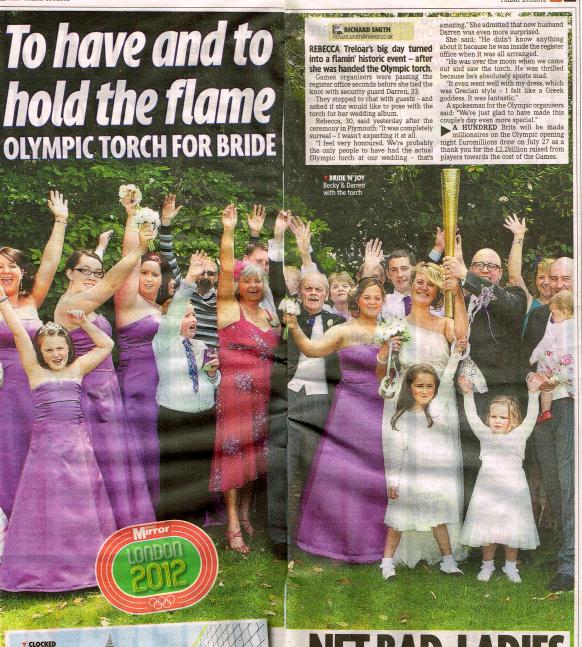 Our wedding was gatecrashed – by the Olympic torch team! 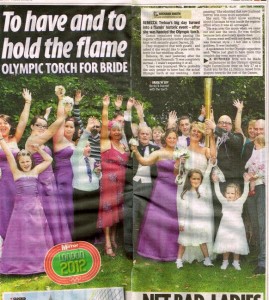 This week, Rebecca and Darren Treloar’s wedding pictures appeared in the Daily Mirror newspaper after Olympic games organisers gate crashed their big day and asked if they’d like to hold the torch. The couple had got in touch with us and asked us to help them sell their pictures to a newspaper.

On May 19, 2012, Rebecca, 30, a full time mum and Darren, 35, a security guard from Plymouth, were shocked but honoured when the Olympic team turned up at their wedding reception in Plymouth and asked if they’d like to pose with the Olympic torch for their official photos.

Rebecca, who met Darren four years ago in a nightclub in Plymouth, said the torch went perfectly with her Grecian style dress and the 50 guests said she looked every inch a Greek Goddess.

The couple, who live with their three young children in Plymouth, said the torch added a bit of glamour to their budget wedding. ‘People have seen the torch on TV in the newspapers, but I doubt if many people will have it on their wedding photos,’ says Rebecca. ‘We feel really honoured. We couldn’t believe how heavy it was – even Darren struggled to hold it for more than a few minutes!

‘It made our wedding day extra special and we’ll never forget the magic moment we held the Olympic torch.’

If there is an incredible moment you’d like to share with the Daily Mirror, email us on message@talktothepress.com or fill out the sell my story form to the right.