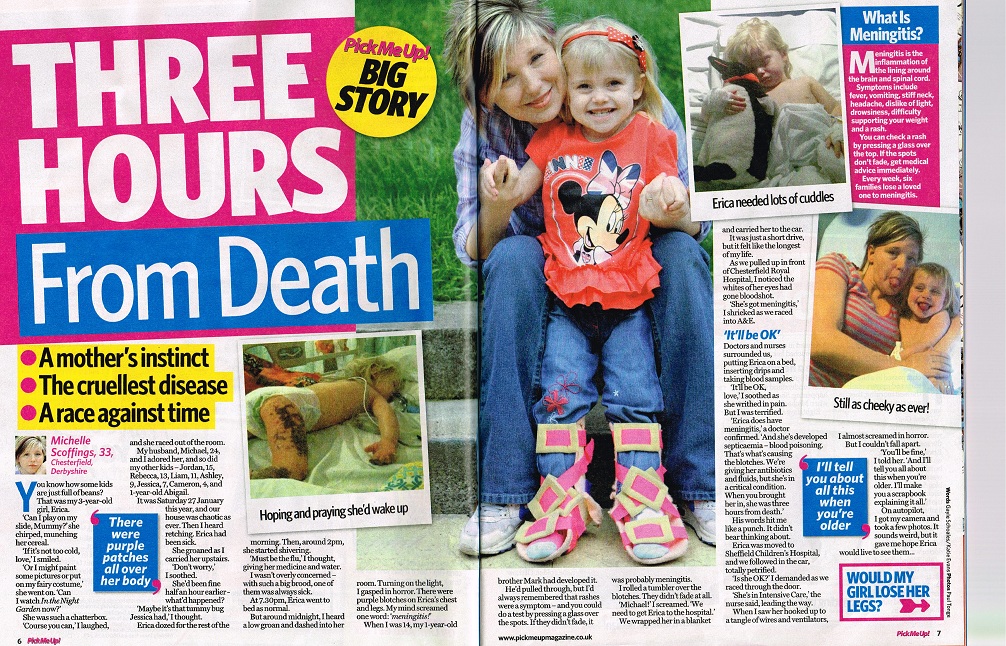 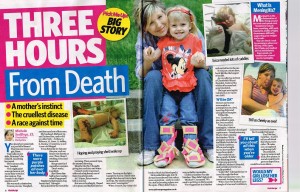 Michelle Scoffings got in touch with us as she wanted to raise awareness of the dangers of meningitis after her three-year-old daughter Erica fell dangerously ill with the disease in January this year.

Despite being given just three hours to live at one point, Erica miraculously pulled through and this week her amazing story appears on the cover of Pick Me Up magazine.

Michelle, 33, says Erica was a happy smiley toddler at the time and had been running around happily that morning. But after being put to bed that night, she cried out asking for a drink. When Michelle went to pick her up she saw she couldn’t move and had dark purple marks on her body.

Alarm bells immediately started ringing and Michelle realised her daughter almost certainly had meningitis. She knew the signs to look out for because 20 years earlier her brother, then just a year old, had contracted the disease.

Michelle’s husband Michael raced them to hospital, where they were told Erica was gravely ill and had just three hours to live. If it hadn’t been for her quick thinking Michelle says her daughter would be dead by now.

She was terrified and watched helplessly as doctors tried to save Erica’s life. She had meningococcal septicaemia and her body was rapidly poisoning itself. As the septicaemia took hold, Erica’s legs went black as the disease ate away at her flesh, exposing the bone.

Doctors managed to save Erica’s legs by using vacuum therapy, which encouraged the tissue to cover the bone, and she now has to wear splints because of the extensive muscle loss in her legs.

The brave little girl has since undergone 14 operations and, five months on, her parents are now hoping she’s on the road to recovery. Michelle says: ‘Erica is truly a little miracle.’

We are always looking for incredible stories with happy endings. If you’ve got a story you’d like to sell to Pick Me Up magazine, email us on message@talktothepress.com

Talk to the Press
← Previous Story I got pregnant twice – following my husband’s vasectomy
Next Story → Our wedding was gatecrashed – by the Olympic torch team!