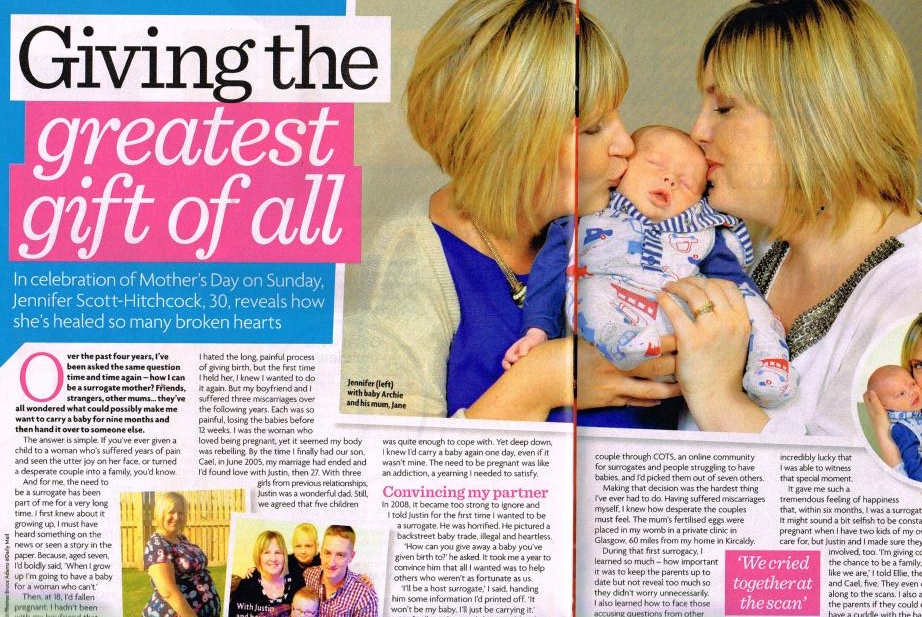 Jennifer Scott-Hitchcock, 30, from Fife, has given birth to five babies, but has given three of them away after becoming a surrogate parent.

Earlier this year, she gave birth to Archie, before handing him to his biological parents, Jane and Gary, a couple in their 30s from the Orkneys.

She says helping other women fulfil their dream of becoming a mother gives her the ultimate high and we arranged for her to share her story with Woman’s Own magazine.

The mother-of-two to Ellie, 11, and Cael, 8, from her first marriage, says that in 2008 she felt done with childrearing, but not with pregnancy.

She confesses that she adores being pregnant, and says it is almost like an addiction. When she first broached the idea of surrogacy in 2008 her husband Justin, a civil servant, was horrified and banned her from even considering the idea.

Jennifer was devastated, ever since she was a little girl she has said she would carry a baby for anyone who couldn’t have their own. But after a year of persuading her husband, Justin was on board. So in 2009, Jennifer signed up to COTS – an online community where surrogates and ‘intended parents’ can meet.

She began chatting to a couple of ‘intended parents’, and just a few months later decided to become their surrogate. In 2010 Jennifer gave birth to her first surrogate baby and it was one of the proudest moments of her life. She had no regrets as she handed over the baby to her ecstatic mother and father.

Jennifer loved the feeling so much, just a few months later she was speaking to another couple on COTS and soon became their surrogate. Their son was born in 2011. And just last month Jennifer gave birth to her third surrogate baby, but says it won’t be her last.

We were thrilled to arrange to Jennifer to sell her story to Woman’s Own magazine. If you’ve got an inspiring story and would like to share your story with Woman’s Own magazine, email us on message@talktothepress.com or fill out the sell my story form to the right.