How selling your story can raise awareness: ‘Help me find the thugs that did this to me’ 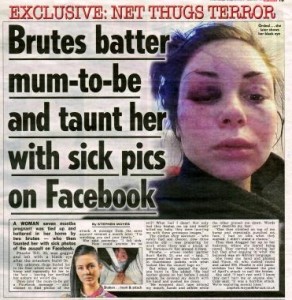 If you’re considering selling your story to raise awareness, then read on.

When Phoebe Tilet, 20, from Portsmouth, went to open her front door in the morning she thought it was someone from the council. At the time, she was 7 months pregnant.

But to her horror, two men burst in her house, tied her up and repeatedly punched her in the face before taking pics on their phone and fleeing the house. Later, they’d taunt her on Facebook by posting pictures of the attack.

With Phoebe’s attackers still at large, and the police flummoxed by who they might be, Phoebe decided to go public and contacted us. The resulting high profile piece in the Sun newspaper is an example of how selling your story can help raise awareness in a desperate situation.

Incredibly, Phoebe and her baby, Dexter, now three months, survived the ordeal – but Phoebe’s been left a shell of her former self.

‘This should be the happiest time of my life,’ says Phoebe, 20, who works in retail and has never been in trouble with the police. ‘But with my attackers still at large I’m looking over my shoulders every day and constantly worried. It’s a living nightmare.’

On April 5th 2013 at 8:00am there was a knock at Phoebe’s door. She assumed they were from the council and were going to tell her off for putting her bin out early. But when she opened the door they barged in and covered her mouth – one was wearing leather gloves.

She tried to tell them she was seven months pregnant but couldn’t speak because they’d gagged her before tying her up. Then, one of the men sat on her bump and repeatedly punched her in the face. After, the other one took photos of her on his phone before they lifted her up and launched through the hallway and into her bedroom. Terrified, she thought they were going to rape her. Shortly after, the pair fled the house.

Safe in the knowledge they had gone, Phoebe managed to untie one of her hands and called her dad who lived around the corner. He was there within minutes and called the police and an ambulance rushed Phoebe to hospital. She was in a lot of shock and was having severe pains in her stomach. She also hadn’t felt the baby move for a while – which was quite unusual as he was an active baby. Upon arrival, she underwent a scan and and Xray. Incredibly, against the odds, the baby had a heart beat and had survived the ordeal. She remained in hospital for the whole day before she was discharged.

Meanwhile, the police were carrying out their investigation. A paperboy confirmed two black men had fled her house and got away in a van driven by another black male. Unfortunately, the CCTV camera in the estate didn’t work and DNA later recovered from the duct tape couldn’t be traced.

Phoebe couldn’t go back to the house and moved in with a family friend around the corner. A few days later she logged into her Facebook account and discovered someone had uploaded the photographs of her gagged and tied up during the attack and sent a message saying ‘I’m watching you.’’

‘It’s been three months now and there’s still no arrests or leads,’ says Phoebe. ‘I suffer from bad nightmares and am terrified to leave my house – or even be in it. I just hope the police can find who is responsible and I hope that going public will bring in some new leads.’

We’ve now secured Phoebe a deal with a women’s magazine. If you’re thinking of selling your story to raise awareness of any issue, contact us to for a free confidentail chat.

You can email us on message@talktothepress.com or fill out the selling your story form to the right.