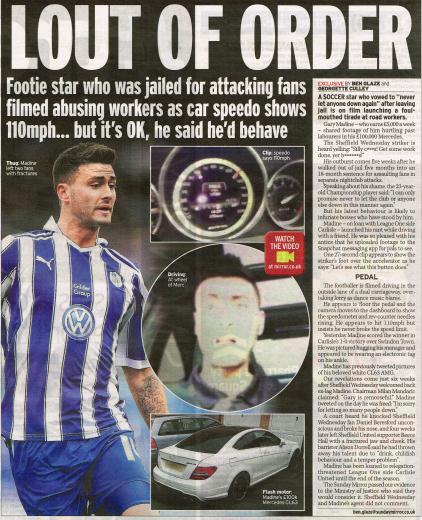 When a tipster got in contact with us to tell us about the appalling behaviour of £5k a week football player Gary Madine, we knew the Sunday Mirror would be interested.

Madine who plays for Sheffield Wednedsay, has only just been released from prison after assaulting fans in separate nightclub attacks. Afterwards, he’d said ‘I can only promise never ot let the club or anyone else down in this manner again.’

But while driving at 110mph showing off to a friend, Madine launched a foul-mouthed rant at a group of labourers. Foolish Madine then posted a video of his driving and abuse onto Snapchat.

The tipster who passed the video to us said: ‘I was shocked and disgusted by his wreckless driving and awful behaviour. He’s a man who knows no bounds and I felt the public had to be made aware of his true character.’

Throughout the process, the tipster was kept entirely anonymous. The story appeared in the Sunday Mirror at the weekend.

If you’ve got a story you’d like to sell to the Sunday Mirror, and remain anonymous, get in touch with us to tell us a bit more about it. Email us on message@talktothepress.com or fill out the sell my story form to the right.

Talk to the Press
← Previous Story I don’t know when my daughter is happy, sad or hurt because she can’t stop smiling – says Mum of brave little girl with Angelman syndrome
Next Story → Our client Ellie gets publicity in newspapers – next stop TV!