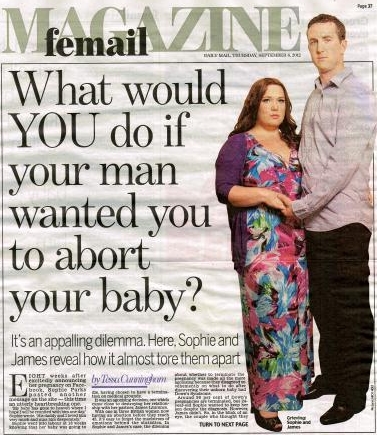 Our agony over whether to terminate our disabled child 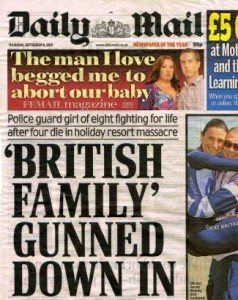 When Sophie Parks and her partner, James, found out their unborn baby was severely disabled they had to make the most agonising and heart-breaking decision of their life – to continue with the pregnancy – or terminate it.

Worried their unborn child’s quality of life would be poor and their child would suffer as a result, they decided to have an abortion. This week the couple appeared in Femail where they spoke honestly about aborting their unborn child at 18 weeks. The decision was not an easy one, and it almost destroyed their relationship – but now they’re stronger than ever.

And this week, they shared their thought process and their feelings with the Daily Mail.

Sophie discovered she was pregnant in May 2012, but the couple’s happiness was short-lived. The 12 week scan revealed the baby was likely to be suffering from Down’s Syndrome, a fact that was confirmed by diagnostic test. Nonetheless, Sophie wanted to continue with the pregnancy, but James was adamant that he didn’t want to keep it. The weeks that followed were a nightmare for the couple as they agonised over their decision. Sophie convinced James that Down’s children could have a good quality of life, but then they received some even more devastating news.

Further tests revealed the baby also had another rare chromosome abnormality known as XXY and was likely to have a very poor quality of life. It was this news that led the couple to make the hardest decision of their lives and Sophie had a termination at 18 weeks. At the end of July 2012, Sophie went into the Royal Berkshire Hospital to be induced.

‘I want to get the message across that a termination is not an easy option for anybody,’ says Sophie. ‘It was the hardest decision of our lives. We loved our baby dearly, but we didn’t want him to have a painful and difficult life. The decision almost ruined our relationship but now it’s brought us closer together. Joseph will always be in our hearts.’

If you’ve been through an emotional ordeal that you would like to share, email us on message@talktothepress.com or fill out the sell my story form to the right.

Talk to the Press
← Previous Story I thought I’d be childless forever – now I’ve got miracle triplets thanks to a surrogate mother
Next Story → I married the best man! This week’s Love it! magazine