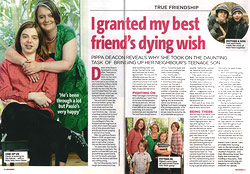 In this incredibly moving interview in Woman magazine, Pippa Deacon, 42, tells of how she decided to adopt 15-year-old Paulo last year after her best friend Toni died of cancer.

It was Toni’s dying wish that Paulo be cared for by Pippa, who had spent the last few months of Toni’s life constantly by her side as she underwent gruelling rounds of chemotherapy and radiotherapy. When Toni received the devastating news that her cancer was terminal, she asked Pippa and her husband Ian if they would foster Paulo after her death. Pippa was not only paid for her story, but Marie Curie, the charity that helped them both during Toni’s last months, recieved a name check in the article.