I don’t know when my daughter is happy, sad or hurt because she can’t stop smiling – says Mum of brave little girl with Angelman syndrome 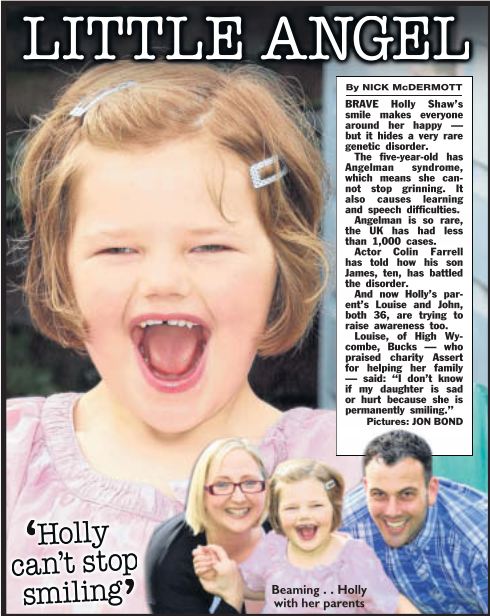 Most parents know when their child is sad, unhappy or stressed, but Louise Shaw says it is impossible to tell because of her five-year-old daughter’s rare condition. Holly Shaw from Aylesbury in Buckinghamshire was born with Angelman syndrome-a chromosome disorder which causes severe learning difficulties and puts a permanent smile on her face.

Sufferers present a happy demeanour, so are often smiling or laughing, and tend to be easily excited. Incredibly, Holly, now five, appears permanently happy and smiling because of rare Angelman syndrome.

Even if she falls over and hurts herself, Holly still has a smile on her face. We placed the family’s story with the Sun newspaper. One time Holly tried climbing out of her cot and landed on her head. It was only when Louise heard the massive thud and noticed the bump on her head that she realised what had happened. But instead of crying, Holly was walking around with a huge grin.

Because Holly has speech disorder she can only say eight words and it is hard for her to express her emotions. She instead uses her body language to show what she is thinking.

Today, Louise is constantly on tenterhooks, keeping an eye on Holly in case she does hurt herself badly and they don’t realise. ‘It’s so hard not knowing what your daughter is thinking and feeling and you feel like you are always second guessing.’

The newspapers and magazines we work for love stories about courageous children. If you have a story you’d like to sell, email us on message@talktothepress.com or fill out the sell my story form to the right.