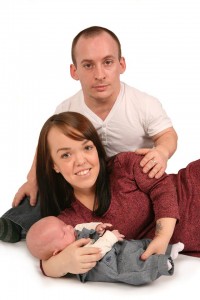 Laura Whitfield, 24, from Sunderland, thought she would never find love – because she was born with dwarfism. Tragically, as a child, she used to ask her mum why she hadn’t let her die at birth.

But Laura’s life has panned out wonderfully. Today, we arranged for Laura to appear on This Morning (ITV), sharing her incredible story of finding love and having a baby son. Laura, who is one of our clients, has already shared her story with newspapers, and she’ll soon be appearing in several women’s magazines too.

The 24-year-old says ‘her dreams have come true’ after meeting her Prince Charming and having a beautiful baby boy. However throughout her teens, Laura struggled to feel accepted and even tried to take her own life after her mum died when she was just 13.

During her school years Laura found it hard being different from everyone else, and longed to be a normal height.

But when she was 15 Laura started dating Chris, and things began to look up. Chris made Laura happy and things between the two became serious. They chatted about their future together, and spent all of their time together.

Sadly, two years later when Laura was 17 she was left heartbroken when the couple split after arguing. Devastated, Laura stopped going out on dates and never thought she would find love again. For five years Laura didn’t get into a serious relationship, and only went on a handful of dates.

But two years ago Laura fell head over heels in love with Nathan, 34, while performing in the seven dwarves pantomime in Christmas 2012 – Laura played Dopey, while Nathan played Grumpy. Despite thinking she would never find love, things between Laura and Nathan moved quickly. Just six months later in March 2013, Laura knew Nathan was the one for her so she bravely proposed to him while at a family dinner.

But the couple had another shock in store. The pair had always wanted to start a family, but had said they wouldn’t put pressure on themselves to try for children – they said if it happened, then it happened. However, just a month later in April 2013 Laura was delighted to find out she was pregnant.

But, having dwarfism Laura faced no normal pregnancy. If she gave birth naturally the pressure on her body would have killed her, so she would have to have a caesarean. Aware of the risks, Laura continued with the pregnancy but just a few weeks later disaster struck. At one of her weekly scans a genetics doctor told Laura that her baby was measuring very small.

She was warned that the baby may have inherited two types of dwarfism, because both Nathan and Laura have two different versions of Dwarfism. While Nathan has pseudoachondroplasia – a type of short-limb dwarfism – and Laura has achondroplasia – the most common form of dwarfism. No dwarf has ever inherited two types of dwarfism so doctors were baffled. They didn’t know what his chances of survival were and had no idea what it meant for their baby.

On November 20th, doctors decided to perform the C-section a month early and Laura woke up from the C-section to see Nathan standing over a little cot – with a baby boy inside. Against all the odds, Nathan, named after his father, was a healthy little boy.

Nathan was 5ibs and is the ONLY baby to have inherited a double-dose of dwarfism. Doctors still don’t know what affects this will cause in later life, but they all agree he is a medical marvel.

But now, Laura is the happiest she has ever been with her new family. Laura says: ‘Growing up I always worried I wouldn’t be able to fall in love and have children. But I’ve proved myself wrong. I’m so happy it feel like a fairy-tale. Baby Nathan is my little miracle and I’m so proud of him. He has proved doctor’s wrong. I’m thrilled to have started a family against all of the odds. I want other people out there who are struggling to know that dreams can come true, you just have to persevere and stay positive.’

After appearing on the show, Laura received dozens of messages from viewers congratulating her and telling her how gorgeous her son he is.

If you have a story to sell and would like to appear on This Morning, email us on message@talktothepress.com or fill out the sell my story form to the right.