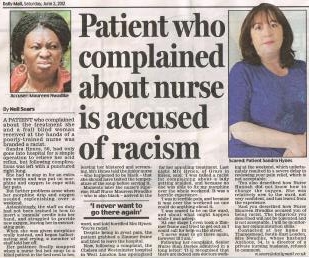 Branded a racist – when I complained about an incompetent nurse 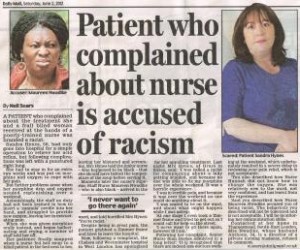 Last week, we arranged for Sandra Hynes, 50, from Essex, to speak exclusively to the Daily Mail about how she was left shocked and upset when a senior nurse accused her of being racist – just because she’d questioned a junior’s nurse’s competence.

In October 2011 Sandra went into Chelsea and Westminster hospital for a simple endoscopy because she was suffering from reflux. But the 40 minute procedure went wrong and her right lung was punctured. She was moved to another ward, and during this time she was shocked by what she saw. Astonishingly, not one nurse on the ward could insert a cannula needle in her hand so Sandra was left without pain-relief for almost two days.

The following day Sandra’s oxygen almost ran out and a junior nurse didn’t know how to change it. The same nurse then scalded a blind patient in a bed next to Sandra by putting hot soup into her mouth. When Sandra heard the patient scream she told the nurse that she should have tested the soup on her wrist first. It was following this that a senior nurse accused Sandra of picking on the junior nurse and called her a racist because the nurse was black. Following Sandra’s complaint to the hospital, she recieved an apology from the hospital.

‘I couldn’t believe it I was called racist,’ says Sandra, who lives with her 21-year-old son in Essex. ‘It had nothing to do with the colour of her skin, or the fact that she was foreign, I was simply worried about her competence and I was well within my rights to say so.

‘She was severely lacking in common sense and I was worried for my wellbeing and the other patients on the ward. I went to Chelsea and Westminster because I thought it was a good hospital – but I’d never go back there again.’

If you have a story of hospital negligence you’d like to share, email message@talktothepress.com or fill out the sell my story form to the right.