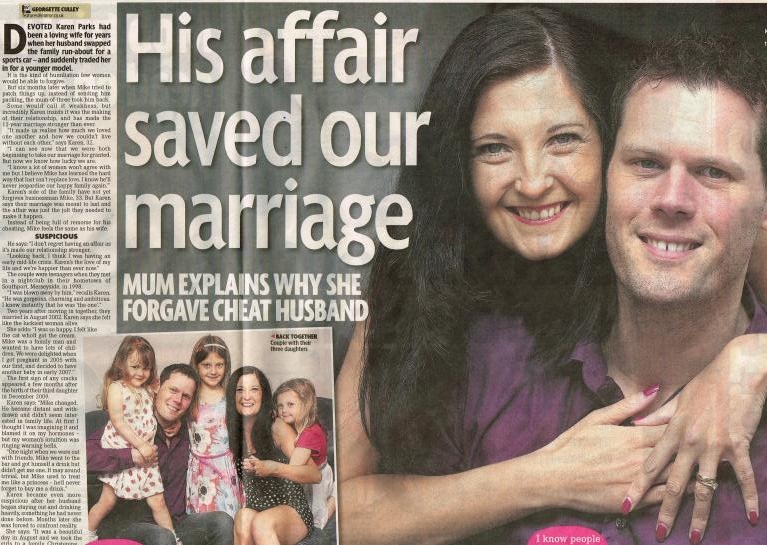 Can an affair save a marriage? Our clients think so, and we helped them sell their story to the Daily Mirror 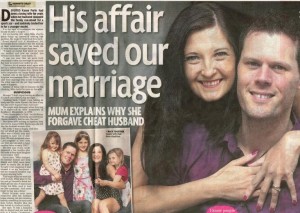 When Mike Parks got in touch to tell us about his relationship story, we knew a newspaper would be interested in hearing it.

In 2009, Mike had an affair. But instead of driving the couple apart, Mike and his wife Karen say his affair saved their marriage. We sold their story to the Daily Mirror, where it appears this week.

Until his affair, Mike and Karen appeared like any other couple. But their happy life was torn apart when Karen found out that Mike, her husband of 14 years and father to their young three girls, Kimberley, eight, Cadence, five, and Jessica, three, had been having an affair with a younger woman. But if Karen was hoping for a grovelling apology followed by a grand gesture to win her back, she was mistaken.

Instead, Mike shacked up with his 21-year-old mistress in a rented one bedroom flat and traded in his trusty family carrier for a sports car.

But in a story of extraordinary forgiveness, Karen gave Mike a second chance after he was seriously injured in a car crash four months after their split. Today the couple are back together and Mike has moved back home – along with his family estate which is now parked safely in the drive. And surprisingly, Karen now says the affair was the best thing that happened to them.

‘I can’t say I’ll ever understand why Mike strayed, to me, we were happily married,’ says Karen. ‘The affair was extremely painful, but some good things came out of it. I’m so glad we gave our marriage a second chance.’

Mike says: ‘I don’t regret having an affair as it’s actually made our relationship stronger. Looking back, I think I was having an early midlife crisis. The mistress was high maintenance and a mistake. Karen’s the love of my life and we’re happier than ever now.’

If you’ve got a relationship story you’d like to sell to a national newspaper or women’s magazine, email us on message@talktothepress.com or fill out the sell my story form on the right.

Talk to the Press
← Previous Story Incredible story of mum who wakes up from a coma, and thinks it’s 1996
Next Story → ‘Thank you very much for taking the time to write my story’ – we help Anna McVicar sell her true anorexia story to the Daily Mirror