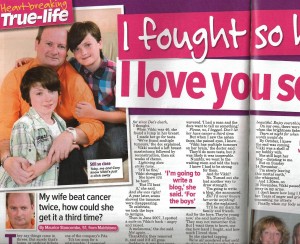 When we first read Vikki Stancombe’s blog, which charted her fight with cancer, we were close to tears. Vikki lost her battle against the disease but before she died, she left a series of inspirational and moving messages to her sons and husband, Maurice.

Vikki was first diagnosed with cancer in April 2006 and underwent a mastectomy and chemotherapy and radiotherapy. Later that year Vikki was diagnosed with skin cancer. She fought both, and won but, in July 2010 doctors discovered the cancer had returned and had spread to Vikki’s brain. She had just months to live.

Following her diagnosis, Vikki started to write a daily blog charting her illness. In it, she speaks of her rollercoaster of emotions centred around her boys and trying to make the most of every moment with them. Determined to make things easier for Maurice, Vikki also set about sorting out finances and insurance and even started to plan her own funeral. The blog ends four days before her death when she writes: “I am slowly leaving this mortal Earth, but the time I’ve had, although short, has been fulfilled by my two beautiful boys, and my loving husband.” Maurice felt it important to share Vikki’s musings on life with others and we placed her story in Chat magazine – with Maurice donating the proceeds to the Maidstone Oncology Department at the hospital Vikki was treated in.

You can read Vikki’s blog by clicking http://mycancerjourney-thirdtimearound.blogspot.com/