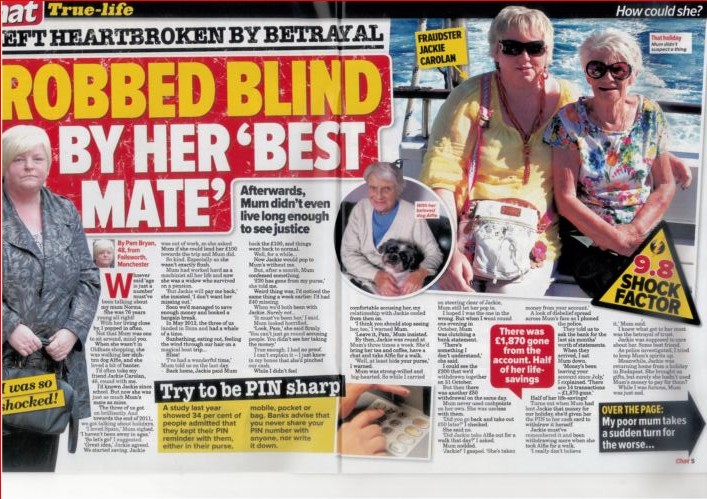 As soon as we spoke to Pam Bryan, 48, from Failsworth in Greater Manchester, we knew we could help her secure a deal for her story. And we secured her a deal with Chat magazine.

So much so that on the same day she found out Jacqueline had been arrested, Norma suffered a heart attack and fell down the stairs of the home where she lived alone. The grandmother of five was taken to hospital, but sadly died five days after she had fallen in December last year.

The widow had believed Jaqueline Carolan, 46, was helping her out by offering to take her pet dog Alfie for a walk. In fact callous Jacqueline was secretly withdrawing up to £250 every time she volunteered to take Norma’s shih tzu out.

In February this year Jacqueline, who had no previous convictions, was jailed for six months after she had pleaded guilty to fraud and possession an article to be used in fraud at Manchester Crown Court. Judge Lever had told Jacqueline. ‘You befriended an old lady in poor health. She regarded you as a close and trusted friend. You stole her money and that’s despicable behaviour.’

Norma and Jacqueline had become firm friends through Norma’s daughter Pam-who had sons that went to the same primary school. A few years later, Jacqueline had bumped into Pam and her mum at a local car boot sale and they started to arrange days out and trips to the cinema together. ‘I thought she was great company for my mum as they lived so close by,’ says Pam. ‘Now I feel so guilty for introducing them in the first place.’

The pair had been so close that Jacqueline had even been invited on a family holiday with them in Ibiza in 2012. But it was during the holiday that Jaqueline had asked to borrow some money from Norma and she had revealed her PIN number. A year later, Jacqueline had remembered the number and planned to take Norma’s card from her bag while volunteering to take the dog out for a walk. She would do this 14 times over a period of three months.

Each time she secretly took Norma’s bank card from her handbag and used it to make withdrawals totalling £1,870 – half of her life savings. Jacqueline, who hasn’t worked for 20 years, had used this money to pay for holidays and to get her nails done. But was found out when Norma checked her bank statements and realised lump sums of money were being withdrawn. When they changed the PIN number, Jacqueline had been caught on CCTV trying to withdraw more money from a cashpoint.

Pam says, ‘I believe that that betrayal from Jacqueline most definitely contributed to my mum’s death-she was stressed and hardly eating because of the worry of what had been happening. She loved her and thought she was her best friend-my mum would still be here today and would easily have more years in her.’

If you’ve got a story you’d like to sell to a woman’s magazine, or are interested in selling your story to Chat magazine, email us on message@talktothepress.com or fill out our sell my story form on the right.

Talk to the Press
← Previous Story TTTP celebrating as we reach finals at the National Association of Press Agency awards!
Next Story → Being me at last – TTTP client shares true sex change story in this week’s Chat magazine