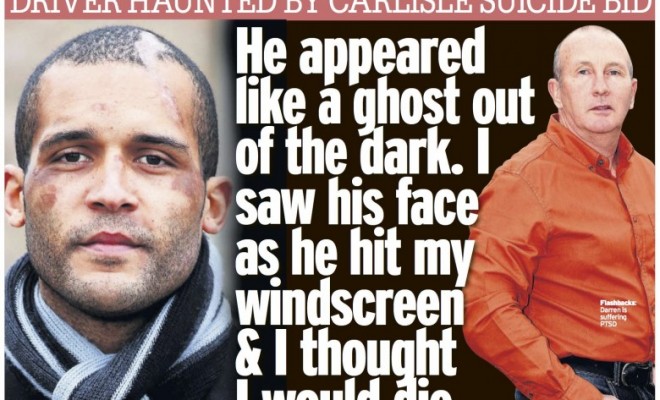 Clarke Carlisle attempted suicide… by jumping in front of my lorry

TTTP client tells The Sunday Mirror how he’s ‘haunted’ after the footballer Clarke Carlisle attempted suicide by stepping out in front of his lorry. Every day haunting flashbacks of the moment Clarke Carlisle jumped in front of lorry driver Darren Pease replay over in his tormented mind.

Darren can recount every second of the smash and will never forget the image of the soccer star’s face as it crashed through the windscreen of his wagon.

Yesterday, in a harrowing interview, Darren, 53, broke his silence to reveal his life has been left in tatters after the former QPR and Burnley defender leaped in front of his 12-tonne lorry just days before Christmas.

The 53-year-old has been left so traumatised by Clarke’s effort to take his own life he fears he will never return to his £19,500-a-year lorry job.

Diagnosed with PTSD, Darren often struggles to leave his house and has to rely on medication to help him cope with life. Since the horrific smash on December 22, Clarke has asked to meet Darren. But although Darren says he has huge sympathy for Clarke’s mental health condition he says he is unable to accept the request as he “doesn’t see what good it will do”.

“That feeling is indescribable. To think you are going to die, I can’t put that feeling into words at all. Those two seconds changed my life forever. I was showered in glass and I couldn’t see at all. I stopped that wagon and I didn’t know where the hell it was. Immediately I just thought, ‘He’s dead, he’s dead, he’s dead’.”

Darren was driving to Driffield on the A64 Leeds to York dual carriageway when Clarke stepped into the path of his wagon, the final desperate act of a retired footballer who spent days plotting his own death.

Clarke appeared 15ft in front of the wagon, leaving Darren less than three seconds to slam on the brakes. The impact was so ferocious the cab was left a crumpled mess, with the dashboard dislodged and his vehicle twisted out of shape.

Shards of glass flew into Darren’s face and left him blind and unable to leave his seat, scared passing cars would hit Clarke or shunt his lorry in to the path of oncoming traffic.

Darren, who lives with his wife of 23 years Cath, 60, a machinist, said: “I was terrified. I knew I was going to hit him and there was just a bang and there was glass all over me. I was in pain.

“I was just thinking, ‘Where’s he gone? I’ve killed him’. Then I was worried he was in the road and someone was going to run him over, someone is going to crash into me.

“The people he could have killed on that road that morning is unbelievable, including me. That wagon could have gone anywhere, I don’t know if it’s pure fate it didn’t end up on the other side of the carriageway into oncoming traffic, or down the banking into the field. That would have been the end of me.

Clarke told how he sank into depression after hanging up his boots and losing a £100,000-a-year role as a pundit on ITV.

The 35-year-old, who has three children, struggled for 18 months and opted to end his life after spending all his cash at a casino. He dropped off the radar from wife Gemma, 33, for two days and was arrested for drink driving before his suicide attempt.

We helped represent Darren’s press interests and placed his story exclusively with The Sunday Mirror. If you’ve got a story to share, please contact us via our story valuation form on the right hand side of this page. You can visit this page for more information: https://www.talktothepress.co.uk/sell-my-story 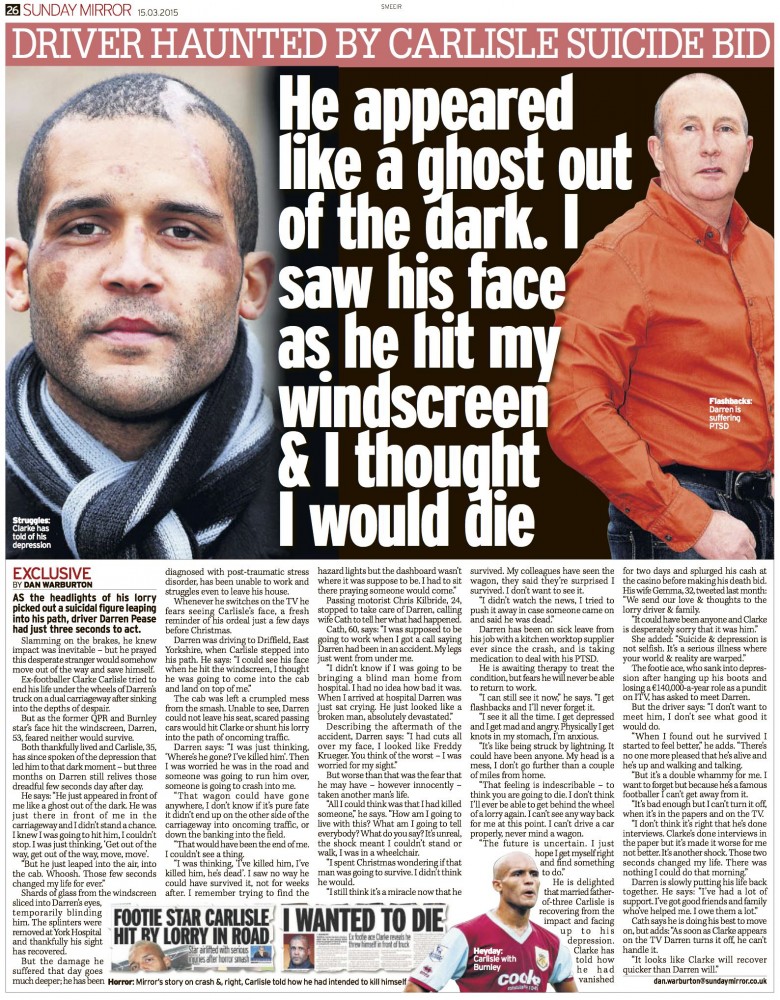