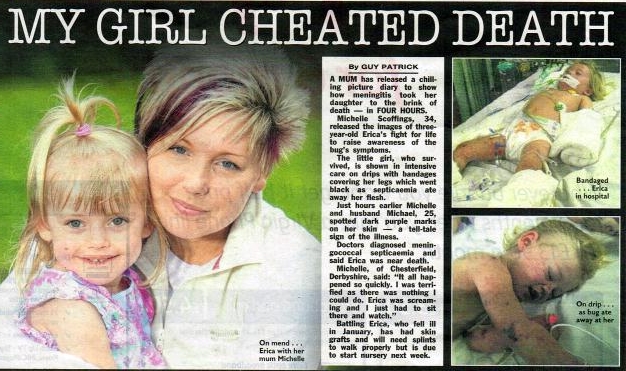 Coverage for Michelle Scoffings’ meningitis picture diary in the Sun, the Daily Mail, the Mirror and the Express 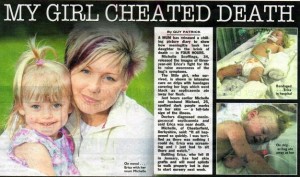 Mum Michelle Scoffings first got in touch with us several months ago, keen to raise awareness of how quickly meningitis can take hold by releasing the picture diary she’s kept of her three year old daughter Erica’s battle with the infection, which took her to the brink of death in just four hours.

We’ve already secured Michelle coverage in a weekly magazine, and today, her story was released to all the papers and recieved huge coverage in the Sun, the Daily Mail, the Mirror and the Express.

Michelle is due to appear on a breakfast show in the morning, and is thrilled she’s achieving her goals of helping other parents spot the signs of meningitis.

Michelle says: ‘It all happened so quickly. I was terrified as there was nothing I could do. Erica was screaming and I just had to sit there and watch.’

Thankfully Erica, who has had skin grafts and will need splits to walk properly, has made a good recovery and is due to start nursery next week.

If your child has battled an illness or you have a story you’d like to share with the national newspapers, email us on message@talktothepress.com