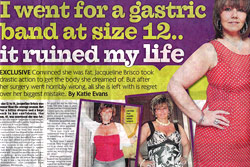 Jacqueline Brisco, a 41-year-old mum from Merseyside, contacted us because she wanted to raise awareness of the dangers of gastric bands and warn other women that they are not the ‘quick fix’ many think them to be.

Two years ago Jackie was a size 12-14 – smaller than the average British woman – but had convinced herself she was grossly overweight. She had just been through a bitter divorce and her confidence had hit rock bottom.

But instead of dieting or hitting the gym, Jacqueline took a drastic route to lose weight by getting a gastric band fitted. Jacqueline is one of an increasing number of women who have resorted to gastric band surgery despite not actually being fat enough for the operation and, fully aware she would be turned down by the NHS, Jacqueline opted to have the surgery with a clinic based in Prague.

Incredibly, as she only weighed 13 stone at the time, Jacqueline was actually advised to gain weight in order to have the operation safely, and her weight crept up to 15 stone before the surgery. However it didn’t go according to plan and, a year on, her gastric band has slipped, leaving her in a lot of pain and unable to eat most types of food. On top of that, Jacqueline says the biggest irony is that she is only 5lbs lighter than she was before the surgery.

We secured Jacqueline a deal with Take a Break magazine, and she also recently featured in a double page spread in The Mirror, where she explains how getting a gastric band is something she will regret for the rest of her life. Jacqueline says: ‘I just hope my story serves as a warning to others not to be as foolish as I was.’

If you’ve got a story you’d like to sell, fill out our sell my story form or email us on message@talktothepress.com