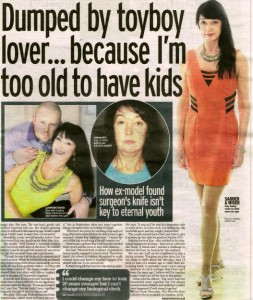 This time last year Kay Silver was the happiest she’d ever been. With her toyboy in tow, Kay had a lot of look forward at the start of 2013.

But this year she is now alone as Dean, now 37, ceremoniously dumped her because, despite telling he never wanted kids, it turns out HE DOES want children. This week, Kay shares her story in the Daily Mirror, and she’ll soon be talking to a women’s magazine too.

When Kay, now 56, first met Dean in September 2011 she’d recently undergone a £5,000 facelift and had regained her youthful looks – so much so that Dean had no idea she was almost 20 years his senior.

The news only came to light when the couple had to declare their passports when booking a holiday abroad, several months after meeting.

Despite the 19 year age gap, Dean didn’t seem perturbed by the news – and continued with the relationship insisting having children wasn’t the be-all and end-all to him.

But heartbreakingly for Kay – it was. Two years down the line Dean dumped her after realising kids were a priority and he needed to meet a younger woman if he had any chance of starting a family.

Naturally, Kay was devastated and during the aftermath of their split her weight plummeted as she sunk into depression. Writing a slimming book helped her overcome her misery as it distracted her from the thought of Dean with younger women. Kay felt that her story serves as a cautionary tale to others who may be embarking on a relationship with a younger man. She says loving someone isn’t enough, as ultimately practical issues will always crop up in age gap relationships. She was keen to speak candidly about her experiences to the Daily Mirror and we secured her a deal for her story.

‘I wouldn’t do it again,’ says Kay, a trained dancer and therapist, who lives by herself in Aldershot, Hampshire, ‘I thought our love was enough but I was wrong. It turned out I could fix my face to look younger, but I couldn’t turn back my biological clock. It was very sad, we didn’t split because we no longer loved each other, we split because it wasn’t viable anymore. But my love obviously wasn’t enough for him, ultimately he chose fatherhood over me.’