Do you regret a drunken tattoo? What about one of a penis like this chap?!

Lots of people regret a drunken tattoo, but when you get a tattoo of a penis, it’s a whole lot worse! 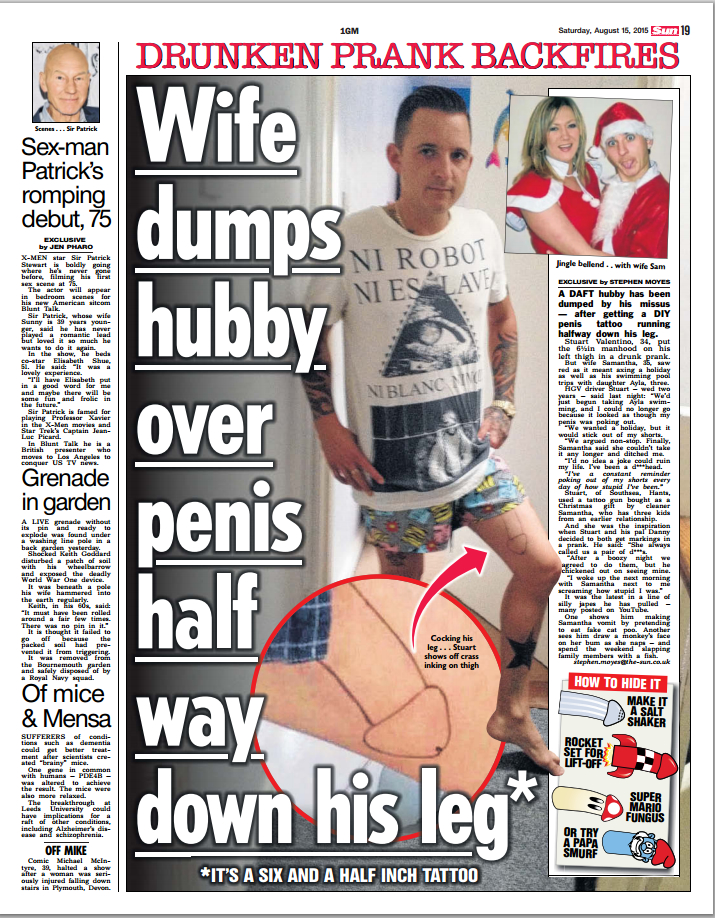 If you regret a drunken tattoo that turned out to be horrific, and you don’t mind making fun of yourself, get in touch and see how much you could earn for sharing a photo of you and your ‘tat’.

At Talk to the Press we see a lot things every day and like to think we are unshockable. However, when Stuart Valentino got in touch regarding his penis tattoo we couldn’t believe it!

Lorry driver Stuart, 34, from Portsmouth, did the tattoo for a prank with his best pal Danny in December 2014.

He’s tattooed it on himself using a tattoo gun his wife Samantha, 35, had bought him for Christmas. The dad of four was drunk at the time and didn’t realise how it would go onto ruin his life.

His friend Danny was supposed to get a tattooed inked on himself too, but chickened out after he saw Stuart’s.

Initially, the penis was only supposed to be a few inches long but it ended up being 6.5 inches long and a couple of inches wide. When Stuart’s wife woke up in the morning she noticed it poking out of his shorts and screamed!

Naturally, she was furious at her husband but didn’t realise just how much she would come to hate it.

In the weeks and months that followed, the pair tried to take their youngest daughter swimming but Samantha says it was ‘too embarrassing’ with Stuart’s tattoo poking out that she banned him from going. What’s more, every time it was a hot day or the pair were preparing to go away somewhere hot Samantha would worry about how other holidaymakers would respond to his tattoo. Sadly, the pair began to argue and last month Samantha walked out on Stuart.

Although Stuart has considered getting the tattoo lasered off, the was quote £1,000 and couldn’t afford it. But after we placed Stuart’s story exclusively with The Sun a company in his local area have got in touch and have offered to remove it for free!

Stuart is delighted and once back from holiday will go ahead with the procedure.

Do you want to be in the media?

If you’re considering selling your story and want to know how much it’s worth, the best thing to do is fill out the form on this page or call our hotline 0207 549 5406.

The papers are always interested in reading about funny tattoos and the story behind them so if you have one, it’s likeley a paper will want to hear about it.

What’s more, if you can’t afford to have it removed then by doing media you will likely get a tattoo removal company get in touch and offer to do it for free – like Stuart.

Where will your story appear?

Our aim is to get you as many media deals as possible. To start, we will place your story with a national paper and syndicate everywhere once it runs. Then we will try and secure you a slot on a popular TV show (if you’re up for that) and two magazine deals.

We will work hard to negotiate the highest fee possible for every piece of media you do and make sure you receive a full readback to ensure you’re happy with the finished piece. Our service is free for you (we are paid directly from the media outlets for supplying/writing your story).