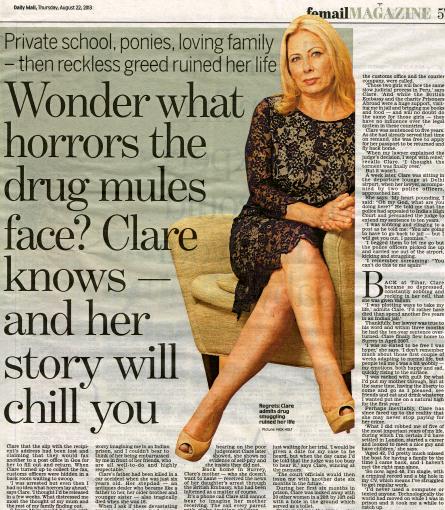 A foolish decision changed the course of my life, just like the two British girls in Peru – Daily Mail story today 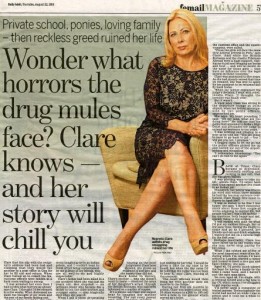 With the news of the two British girls currently facing jail in Peru for alleged drug smuggling, it seemed like the perfect time for Clare to share her cautionary drug smuggling story. Clare, now 48, was jailed in India for five years after being caught drug smuggling, and she says she still faces the ramifications of what she did today.

We placed her drug smuggling story with the Daily Mail, where it appears today.

In 1999, Clare, then 33, decided to go travelling to India, having suffered an upsetting break up with her long term boyfriend. There, she says she got caught up in the travel bug and started experimenting with cannabis. When Clare ran out of money, she took a decision that she will regret for the rest of her life. On the advice of a friend she’d made out there, she hid two pounds of hashish in a statue and sent it in the post to Europe to make quick money. She was told there was no way she could be caught and that she would make a profit of £5000 from the drugs.

Clare was nervous and worried about what she was doing, but she says she was naive and believed she could get away with it as she’d become so removed from her ordinary world. She says if they’re guilty, she’s sure the two British girls in Peru went through the same thought process.

Clare ended up shipping two parcels, but when the third didn’t arrive in Europe, the courier company asked her to go to the post office to pick up a fax. When she got there, she was arrested. She ended up spending the next five years of her life in Delhi’s largest jail, which houses 20,000 inmates, waiting for a trial.

Her parents were devastated, and Clare says the hardest things was seeing her mother cry during her visits to see her daughter to try to get her freed.

Clare had to endure the most harrowing conditions and experiences in jail, where there was constant screaming, shouting and banging. People were often taken away for electric shock treatment too. Clare eventually returned home in 2007. At first she found it hard to settle in and fit back in with her middle class friends, who were all horrified and confused over the path her life had taken.

She is determined to put the past behind her, but says that whilst every day she feels happy – simply because she is not in jail – she will always struggle with the fact that the time she has spent in jail means that she will never marry and have children. She says a moment of madness changed the course of her life, and she’ll regret what she did forever. She wanted to share her true drug smuggling story to warn other yount women not to make the same mistake she did.

If you’ve got a cautionary tale you’d like to share with the press, email us on message@talktothepress.com or fill out our sell my story form to the right.