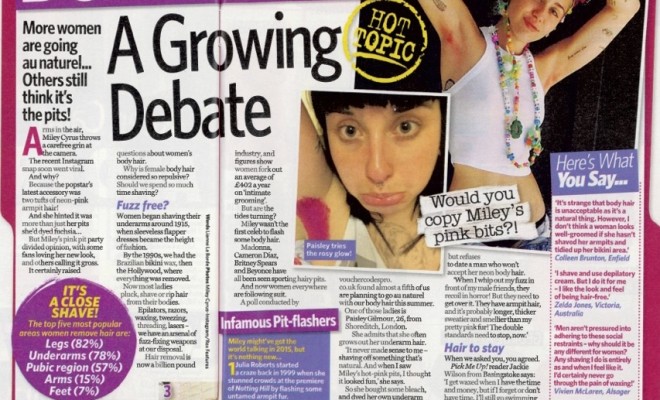 Is body hair daring or scary? Is dying armpit hair a new trend?

Last month popstar Miley Cyrus caused a stir when she stepped out with her pink-dyed armpit hair – opening up the debate on whether female body hair is acceptable or scary.

When our own Paisley Gilmour read the story, she decided to ditch the razor and support Miley and other ‘liberated’ women, by going au natural. As a feminist, she felt ‘sad’ that people branded Miley ‘disgusting’ for refusing to shave her body hair.

Since then, Paisley’s been grooming her underarm hair and even dyed it pink to demonstrate her solidarity with the A-lister. This week Paisley appears in Pick Me Up where she speaks candidly about her furry pink pits and how men have responded to her since she decided not only to embrace, but celebrate, her body hair.

Paisley reveals that unlike most women who spend a small fortune on products to keep their under arms fuzz -free, she enjoys showing it off by dying it bright colours.

Incredibly, a study carried out by Remington revealed British women spend on average £8,000 in a life-time removing unwanted hair.

On top of this, the study revealed that 88 per cent of women will spend four months of their entire lives waxing, shaving, plucking and epilating unwanted body hair with a whole range of fuzz fighters including razors, epilating creams and wax. Some even opt for a more permanent solution by having lazer treatment.

Paisley tells how she felt ‘relieved’ when Miley stepped out with her pink pits – it gave her the ‘green light’ to rid her bathroom cabinet of all the products she’d bought to achieve her ‘totally nude’ look.

As she did so, she reflected on the hundreds of pounds she’s spent over the years removing her ‘unwanted ‘hair – believing the ads which drummed into her the message that staying hairy was as socially unacceptable as having B.O. But now she’s ’embracing’ her body hair and flying the flag for other women who want to stay as nature intended – and even make it a fashion statement with a bit of colour!

Sadly, since ditching the razors and waxing salons, Paisley’s love-life has suffered – with guys branding her ‘gross’ for wearing sleeveless dresses with fuzzy pits.

She said: “I’ve been on several dates with guys and it’s all been going well until I reach up and they see I’ve got hair under my arms. What’s more, they call me ‘weird’ for dying it. But it’s completely natural to have hair there and women shouldn’t feel like they have to pluck themselves to death to feel beautiful.

“If it puts men off then so be it..I don’t see why I should change the way I look to assuage their prejudices.’

Do you agree with Paisley? Are you flying the flag for female body hair?

If so, we’d love to hear from you. A number of publications are interested in speaking to women who are going against the norm and keeping body hair.

Paisley would love to hear from women who have taken a stance on the body hair issue by openly flaunting it. If that’s you, please get in touch.

If you have any other story to share with a magazine or newspaper, you can also reach us using the form on this page, or the phone number above. You can read more about how to sell a story to the press on our sell my story page.
Related Itemsarmpit hairbody hairdying armpit hairdying body hairhairy armpitsmiley cyrusPick Me Up magazinepink armpit hair

Georgette Culley
← Previous Story Stalker victim shares her story
Next Story → I changed my name by deed poll to match my Facebook profile!