E-Cigarette Exploded? Talk to the Press

A 30 year old father-of-two cheated death after an e-cigarette battery exploded and set him on fire while he was asleep. 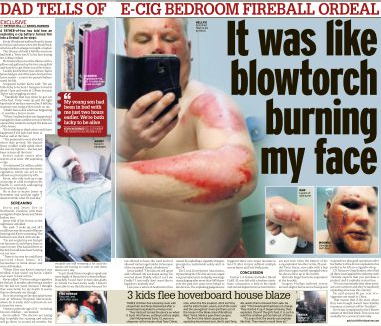 Kevin Woodward was left with horrific burns to his face and arms when the Eleaf iStick, which he had left on charge for two hours, somehow erupted.

Kevin told how the pain pierced through his body and felt as if someone held a blow torch to his face. The quick thinking dad put out the flames with a pillow before calling for an ambulance. Thankfully, Kevin’s three-year-old son Taylor James had got out of bed just two hours prior to the attack – a move his parents feel saved his life.

The scrapyard worker said: “We are all lucky to be alive. I’m just glad the burns were the only outcome to this freak accident.”

It’s reported an estimated 2.6 million adults living in Britain currently use electronic cigarettes which are set to be offered on prescription by GP’s.

Kevin’s story comes as a warning to all, after a string of reports over the past year of these devices exploding. In the wake of the incident, Kevin has complained to the Chinese makers of the product. Kevin, who only took up e-cigs a year ago in a bid to improve his health after years of smoking, was released from hospital today after five days. 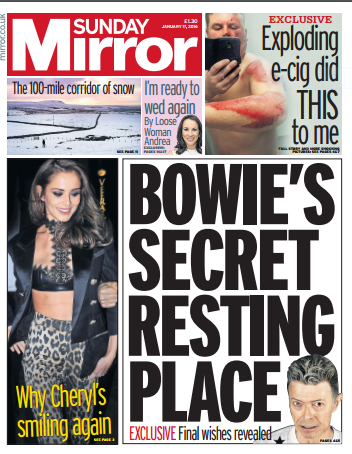 The father from Northwich, Cheshire is due to marry fiancée Jenny in November this year – but says he needs time to heal right now. Recalling the incident Kevin, who lives with Jenny, 23, and their two children Taylor James, three and, Alexia Jordan, two, Said:

“I was watching TV and then I went to bed at about 11pm. I woke up again at 2.30am because Taylor was wriggling around in bed and that was when he thankfully got out of the bed. I had put it on charge the same as every other day to keep it charged up.”

Recalling the moment it exploded he said: “I woke up and the right hand side of my face was on fire.

“It felt like someone was using a blowtorch on me. I didn’t have a clue what was happening – it was like a scene from a horror movie. The paramedics were shocked when they arrived and saw what had gone on.

“My fiancée couldn’t really speak when she saw my injuries – she has just been in tears all the time.”

Jenny added: “I woke up and all I could hear was the sound of flames burning and Kevin screaming. The bedroom was thick with smoke. “I’m just glad my son had got out of the bed a couple of hours before. It could have been so much worse. It’s horrendous to think about and we’re still very much shaken.”

Kevin has been recovering on the specialist burns unit at Whiston Hospital, Merseyside, where he was having his bandages dressed by nurses and was under a strict watchful eye. Thankfully Kevin’s redness and scaring should subside within six months, but he comes as a harsh warning to e-cig users.

How Talk to the Press helped Kevin

We placed Kevin’s story exclusively with The Sunday Mirror, securing a spread and front page spot.

We are currently in the process of securing him and Jenny a magazine deal and a slot on daytime TV to tell their story.

Newspapers and magazines are on the lookout daily for real life stories that change our lives like Kevin’s, so if you have a story to sell and would like to find out how much it’s worth, please fill out the story valuation from on this page (which will be sent directly to our features team) or call 02075495406.

Recent Talk to the Press clients

Here’s a small selection of clients that whose stories we’ve helped place in magazines and newspapers. Not only do we guarantee the highest fees, but we ensure your service is told your way. You stay in control every step of the way (read more on our sell my story page).