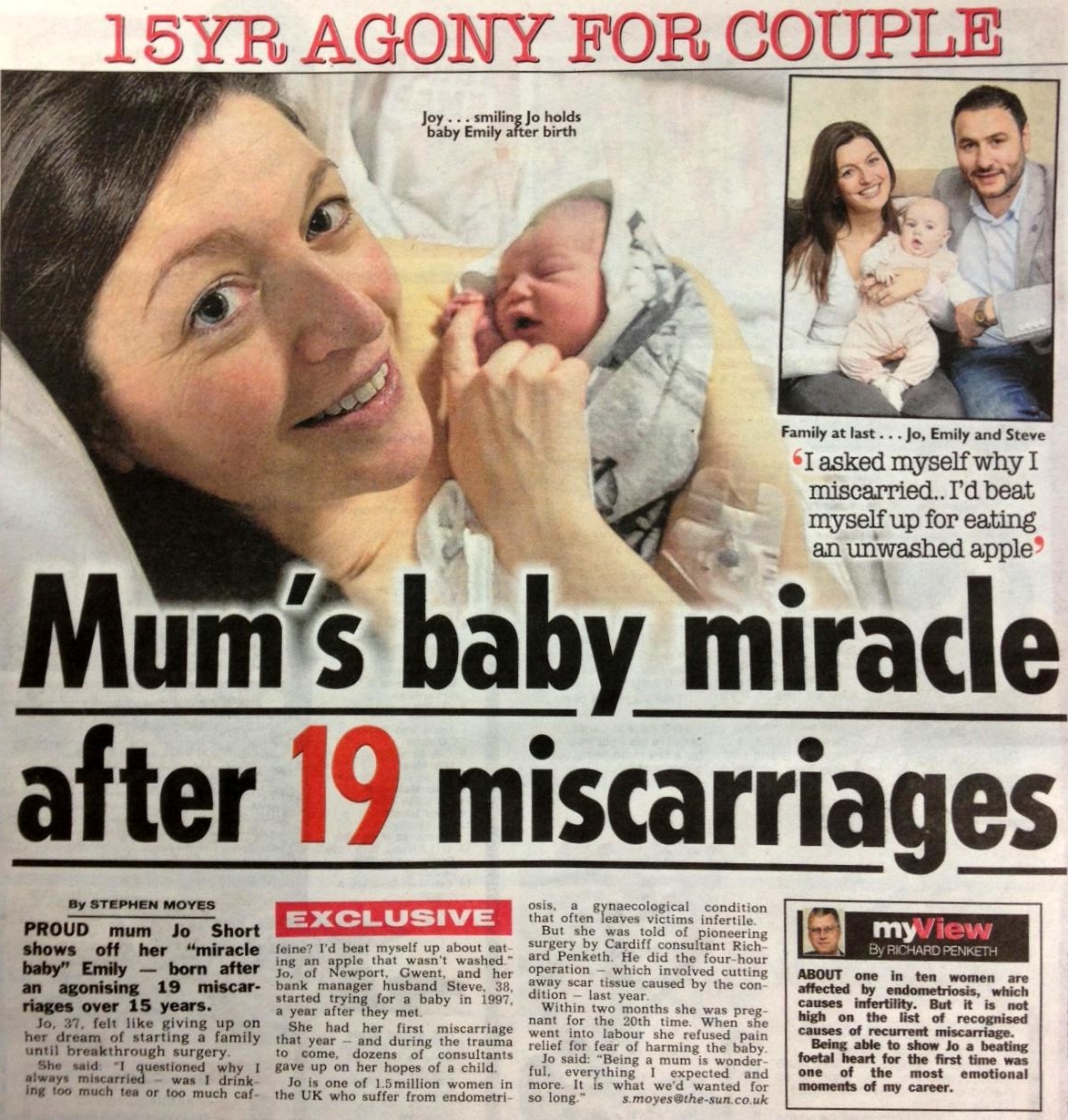 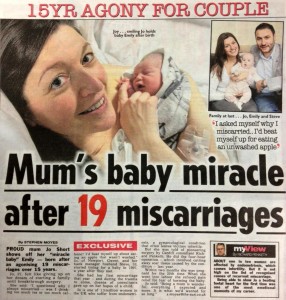 As soon as we heard Jo Short’s incredible story, we knew a paper would be interested.

Jo, 37, a charity worker, is celebrating the birth of her daughter Emily, 17 weeks old. Emily’s birth is miraculous because Jo has had a staggering 19 miscarriages over a period of 15 years, and Emily is her 20th pregnancy.

Emily’s birth has come about because of pioneering endometriosis treatment by two doctors in South Wales. On her journey, Jo has seen specialists at a staggering FIVE different hospitals and undergone countless hormone tests, blood tests and other investigations.

At her lowest ebb, a consultant even told her she must be ‘imagining her pregnancies.’ Another specialist admitted total defeat and said they simply did not know how to help her.

Jo always knew she wanted to be a mother, and also that she suffered from endometriosis which might make it harder to conceive. Because of this, she and husband Steve, 38, a bank manager, started trying for a baby when they were just 22, having met in 1996 at the age of 21. That same year, Jo experienced her first miscarriage that year and says she was devastated. However, she could never have imagined then the trauma that lay ahead.

Although she never had any problem conceiving, until Emily, not a single pregnancy progressed passed eight weeks. As the years progressed without joy, her life became intolerable. She says her friends tiptoed around her as they all fell pregnant. Jo ended up setting up a child minding business, fostering local children and even considered adoption, but nothing could fill the void caused by her own childlessness.

Then, she was referred to specialists Mr Griffiths and Mr Penketh, a consultant gynaecologist at Spire Cardiff hospital in Wales. They told her about pioneering treatment for endometriosis from Canada. Jo underwent a gruelling operation which lasted four hours, after which her surgeon joked ‘I’ll see you back here in 3 months and you’ll be six weeks pregnant.’ Incredibly, she returned in two months – pregnant for the 20th time.

For the first time ever, Jo’s pregnancy reached a stage where the baby’s heart started beating. She says as soon as she saw a heartbeat on the screen, she felt optimism.

In January, Emily was born. Even today, Jo says she looks at Emily with joy and disbelief. She says she can’t believe what she’s been through to have her daughter and hopes her story will give hope to other women experiencing recurrent miscarriage.

Talk to the Press
← Previous Story TTTP client shares her story with the Sunday Times
Next Story → TTTP clients Jo and Steve Short, and their miracle baby Emily, appear on Daybreak