Our families warned us we were mad – but we love our Tunisian toyboys! 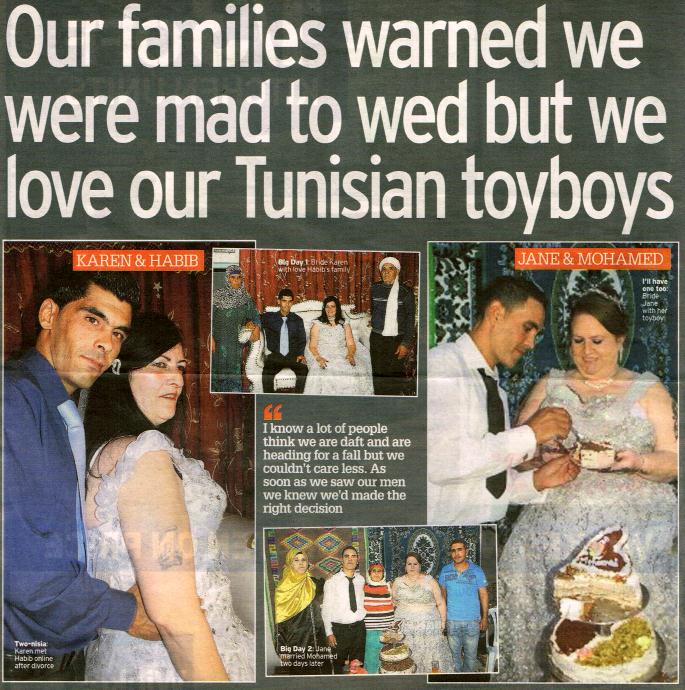 For months, the sisters, both unemployed from Leeds, ploughed thousands into making their cougar relationships work – flying over to the northern town Sbeitla, Tunisia every two months and even funding Mohamed’s English lessons. Mohamed, 31, lost his virginity to Jane and both sisters say their passionate love lives are making them feel like naughty teenagers again.

When Karen and Jane contacted us with their story, we knew editors would love it! And we were right. The sisters have appeared in a women’s magazine and now a newspaper too.

In November 2010, Karen, after splitting from her ex-partner and father to her three children, started speaking to Habib online. The pair hit it off and in May 2011, six months later, they started talking over the internet. Karen told Jane that Habib had a hot single friend he would set her up with so both sisters flew out together. Both sisters say it was love at first site and they enjoyed a passionate kiss with their Tunisian lover as soon as they arrived.

The men introduced them to their families after three days. Habib’s sister spoke English and Mohamed’s niece so both sisters would have to communicate with them through them. Although it was ‘daunting’ going into a strict Muslim home and meeting the parents – they say they were welcomed with open arms.

They had a nice meal and their hands coloured in henna. But the local women weren’t so accepting. According to the sisters, when they walked down the street hand in hand with their men, the women would shout things at them in Arabic. They didn’t understand why Habib and Mohamed were with white girls and the men would apparently retort ‘they’re better than you’.

Mohamed could only say ‘hello’ ‘how are you?’ and ‘goodbye’ but Karen says they communicate through the language of love and Habib. After that holiday, the pair flew out in June, July and September of 2011. Jane says Mohamed was a virgin and she ‘taught him everything he knew’.

They’d enjoy road trips out on their motorbikes and would go to the mountain and eat fish and chicken. Shortly after both men proposed at their family home to the women and shortly after both sisters married in a Muslim ceremony at their parents’ home two days apart in Oct 2012.

The sisters, who both have children from previous relationships, are so serious about their toyboys they’re converting to Islam and vow to wear a hijab once their husbands come to the UK. Despite some friends questioning the intentions of their toyboys, they say their kids have been really supportive and it is true love.

If you’ve found love against the odds with a Tunisian toyboy and would like to sell your story, email us on message@talktothepress.com or fill out the sell my story form to the right.