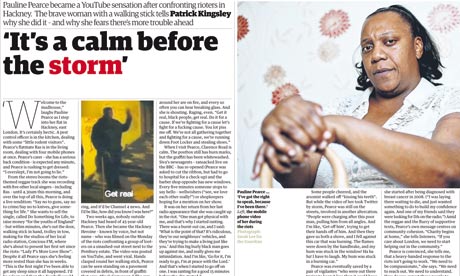 From tabloids, TV and radio to the Guardian and the Spectator – the coverage we secured for riots heroine Pauline Pearce 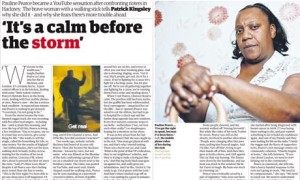 Last month Pauline Pearce shot to fame as the so-called ‘Heroine of Hackney’ after an impromptu speech to looters during the London riots in which she condemned their actions.

A video recording of her brave outburst quickly circulated on across the globe and Pauline soon found herself hounded by the media. That’s where Talk to the Press stepped in and Pauline appointed us to handle all her media requests and ensure she was happy with the way her story was told.

Taking the pressure off, we quickly secured Pauline an exclusive interview with the Sunday Mirror which appeared in print just days afterm she found herself an internet sensation. In order to ensure exclusivity of her story, the newspaper whisked her away to a smart hotel in Windsor, where she enjoyed a 3 days break away from the reporters waiting outside her house.

Pauline went on to appear on This Morning with Eamonn Holmes and Ruth Langsford and on BBC World’s Outlook radio show, which was streamed to more than 30 million people. She then went on to do further interviews with The Guardian and this week, she is in the Spectator magazine. Plus, Pauline has been on Radio Five Live and today, she’ll be on Loose Women.

There’s nothing we like more than helping ordinary people who find themselves making news headlines. If you, or anyone you know, wants to find out more about how we can help with handling press attention, email us on message@talktothepress.com or download our free guide to handling press.

Talk to the Press
← Previous Story Guest blog post by @lsmedialtd: when and why it’s worth paying for a PR agent
Next Story → Our clients featuring in a Channel 4 documentary, Friday night at 7.35pm