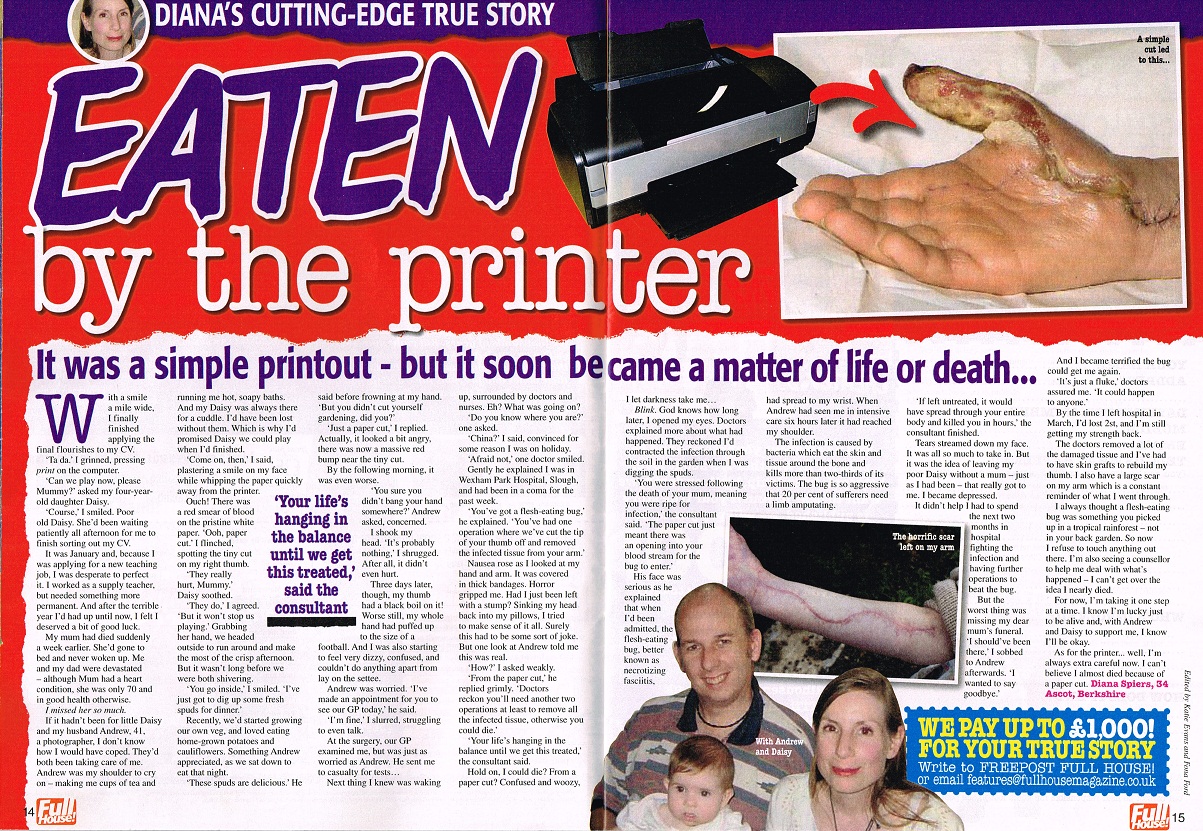 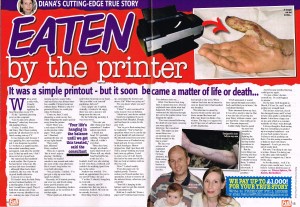 Diana Spiers got in touch with us as she wanted to raise awareness after being struck down with a horrific flesh eating bug which almost killed her – thanks to a paper cut. This week Diana’s shocking story appears in Full House magazine, where she tells how she is still recovering after the gruesome infection, called necrotizing fasciitis, left her in a coma earlier this year.

The rare bug is caused by bacteria which eats the skin and tissue around the bone and, shockingly, it kills more than two thirds of its victims, so Diana is incredibly lucky to be alive.

After her story was published, Diana told us ‘I’m really pleased I could get my story out there and raise awareness. You have been so helpful and sympathetic at all times, and I’d like to thank you for your kindness and efficiency during what has been a difficult time.’

Diana’s nightmare started when she got a tiny paper cut while printing some documents at home in January this year. Although she thought nothing of it at the time, doctors believe she contracted the infection through bacteria in the soil while she was digging potatoes in her garden, and it was able to enter her body through the paper cut.

Diana’s hand soon became red and swollen her husband Andrew took her to their local GP. Diana says if it wasn’t for the doctor’s quick thinking, she wouldn’t be here today. He immediately realised it was serious and sent her straight to A&E, where doctors diagnosed the rare flesh eating bug.

Diana was rushed into emergency surgery, where surgeons removed the tip of her thumb to suck out the infected tissue in a race against time. Within hours of being admitted to hospital the deadly bug had taken hold and Diana’s organs began to fail. The infection started at her wrist but within hours it had travelled up her arm towards her shoulder. Doctors managed to stop it when it reached her elbow.

At one point the doctors took Andrew aside and told him to prepare himself for the fact his wife might not make it. Tragically, Diana’s mum had died the week before she fell ill and she was unable to attend her mum’s funeral as she was in a coma.

But incredibly she pulled through. She spent three weeks in hospital and underwent three operations to remove infected tissue as well as having a skin graft.

Four months on, Diana is still recovering. She now wants to warn other people of the symptoms to look out for, as she wouldn’t be here if doctors hadn’t caught it when they did.