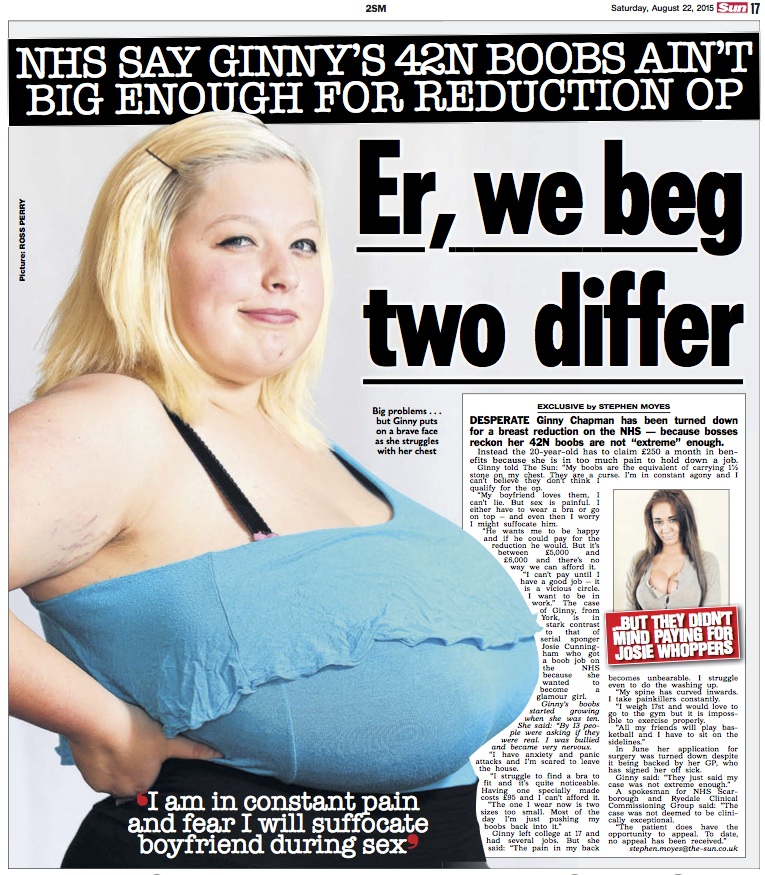 Do you have gigantic boobs and have you been refused a breast reduction on the NHS?

When Ginny Chapman, 20, from York, got in contact with us saying she couldn’t work because her boobs were too big, we felt her pain.

The unemployed youngster is forced to claim £250 a month in universal credit and hasn’t worked a full time job for three years.

She has been denied a breast reduction because the NHS claim her 42N breasts don’t cause her ‘extreme’ pain, despite doctors signing her off sick from work. But Ginny says her boobs are so big she can’t even do the washing up without doubling over in agony.

Her boobs started growing when she was 10 and she tells how throughout secondary school other children would joke she had ‘dipped her boobs in miracle gro’.

By the time she turned 16 they were a 36H and were so big she could no longer buy bras. In the past four years they have grown to a 42 N – a bra size that she finds impossible to shop for.

At 16 she returned begging them for a breast reduction, but she was denied due to funding. One year later, she claims doctors told her they don’t perform breast reductions in the area. Eventually, she went to a new doctor who referred her for funding. But a Scarborough NHS committee turned her down three months ago because her ‘case wasn’t extreme enough.’

Her boyfriend says he just wants her to be happy and would pay for a reduction if he could afford it. Bras cost her £100 and have to ordered online from a specialist. She says: “I can’t work because of the pain, I have extreme back pain all the time. My spine has curved inwards because of it. I went to physio for a couple of sessions and she said my bust wasn’t helping.

“I can’t even wash up, I have to break it up into two sessions and it aches and gets so bad I have to go and lie down. The pain is so bad it makes me feel sick

“I take painkillers constantly and if I know I’m going out, I’ll take double the amount.

“All my friends will go out and play basketball and I have to sit on the side-lines.

“I have anxiety and panic attacks and I’m scared to leave the house. People look at me and I’m very self-conscious – I struggle to find a bra to fit me and it’s quite noticeable.

“Most of the day I’m just pushing my boobs back into my bra.

“I went to work at a homeware store for a month and had four hour shifts but I couldn’t even do that, after an hour of carrying boxes, I would be in tears. I was forced to leave two months ago. I just think the NHS should pay for my breast reduction so I can go back to work.”

We placed Ginny’s story with The Sun and have since secured her two magazine deals. We’re in the process of securing her TV deals as well as contacting a private cosmetic surgeon to perform her op for free in return for press.

If you suffer from gigantic boobs and believe they’re ruining your life, get in touch. Your story will be handled sensitively and we’ll keep in the loop every step of the way. Here is just some of the press we coverage we got for Ginny:

To read more about how to sell a story to the national press, see our Sell My Story page.

If you would like to get your story valued by a member of our team, simply fill out the story valuation page on this page. Nothing will ever be printed without your permission.

Amy Sharpe
← Previous Story Do you regret a drunken tattoo? What about one of a penis like this chap?!
Next Story → Want free PR in the national press?