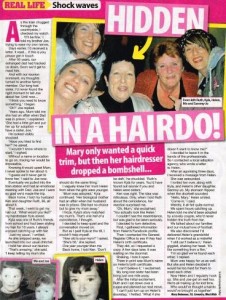 The newspapers and magazines we work for love a happy reunion story. And this week, our client Mary Bateman’s story of finding her long lost sister whilst having her hair cut can be read in That’s Life magazine.

For years, Mary had wondered who her long lost sister was after her mother confessed that she’d had an affair and given the baby up for adoption. What Mary, a retired midwife, didn’t know was that the clue to her sister’s whereabouts was right under her nose. Incredibly, the woman who had cut Mary’s hair every couple of months for the past TEN years was in fact her niece. And her hairdresser’s mother was Mary’s long lost sister.

All the time, the two sisters had lived just a MILE apart.

Mary had made small talk with her hairdresser for a DECADE without knowing they were actually related. Ironically, her own daughter Ruth was close friends with her hairdresser – without knowing they were in fact cousins! Growing up, Mary, now 58, a retired midwife, knew not to tell anyone about the baby her mother had given away, and even kept her mother’s darkest secret from her brother, Joe, now 56.

Because Mary and her parents had moved 300 miles from Scotland to Coventry, she assumed her sister was living with her adoptive family somewhere in Scotland under a different name. But unbeknown to Mary, her half-sister was actually living right under her nose in Coventry.

What’s more – their daughters were friends and had gone to the same school – never knowing they were in fact cousins.

In March 2011, Mary’s hairdresser, Kyla, 35, who has been cutting her hair for over 10 years and went to school with her daughter, Ruth, now 35, relayed a story about her mother being put up for adoption because she’d been born as a result of her biological mum having an affair while her husband was in prison. The hairdresser said her own mother had had a nice upbringing but had always wondered about her biological mother. Mary’s heart stopped – it sounded identical to her own mother’s story of the baby she’d had to give up.

She casually asked more questions and relayed the conversation to her husband, Ken, 67, when she got home. He told her it was ridiculous and that it was just a coincidence but the fact Kyla’s mum, Helen, was the right age seemed too coincidental. She went over her daughter’s house who went to school with Kyla, and had met Helen loads of times. When she told Helen what had happened at the hairdressers, Ruth commented that actually, Mary and Kyla’s mum did look quite alike!

Unable to believe that her hairdressers mother was her long lost sister, Ruth stalked Helen on FB and found her DOB was April 14th 1956. Because she knew her birth date, she contacted the General Register Office (GRO) to see if they had a birth certificate that matched. Incredibly they did, two weeks later, the copy of Helen’s certificate arrived in the post. Mary’s mother was named as Helen’s mother!

She couldn’t just turn up at Helen’s house so she contacted an adoption agency and they confirmed that Helen was her sister. Then, they penned a letter to Helen saying someone was trying to get in contact with her and she needed to call them. Helen rang them straightaway after receiving the letter and went in with her daughters to find out who it was. Kyla, Mary’s hairdresser, couldn’t believe it when they found out who it was.

Since then Mary and Helen have met up and gone for meals and evenings out together. The girls love the fact that they’re cousins and Mary says Helen’s got a brilliant sense of humour.

If you’ve got a happy reunion story you’d like to share with a newspaper or women’s magazine, get in touch with us by emailing message@talktothepress.com or filling out the sell my story form to the right.