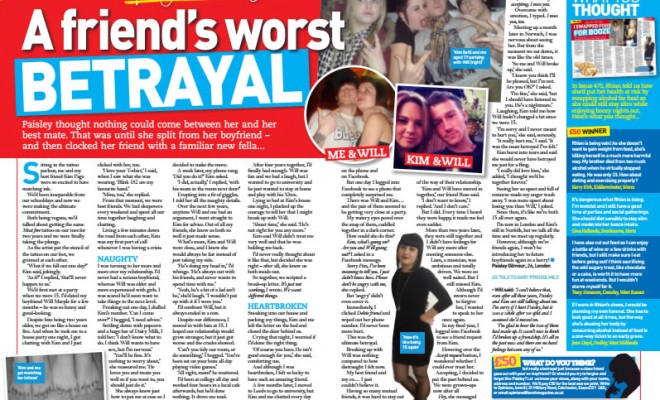 Talk to the Press writers can relate to heartbreak and betrayal stories. Our writer Paisley shared her own story this week…

At Talk to the Press, we understand the importance of being kind and compassionate to our clients. So when somebody contacts us, we always ensure a friendly voice is on the other end of the phone.

We are like everybody else, with stories that could appear on a soap opera. We can relate to our clients’ stories of heartbreak and betrayal.

Last week, after years of helping people tell their stories on being wronged by someone they love, feature editor Paisley decided to share hers to Love It magazine.

Speaking candidly for the first time she told how she suffered heartbreak at the hands of the two people she trusted most – her best friend and her ex-boyfriend.

As Childhood friends, Paisley and Kim did everything together and were inseparable. So when Paisley, now 26, met Will, now 27, a support worker when she was 15, the first person she told was her best pal – Kim, now 26.

As she excitedly exchanged every intimate detail of their sex life with Kim, she had no idea that she would one day go on to sleep with him and even worse – become his girlfriend. But that’s exactly what happened and still to this day Paisley feels pain when she remembers the betrayal.

In 2009, at 19, when their four-year relationship ended, it was Kim who comforted Paisley through the break up. She even helped her move her clothes out of his house, where we had been living together for a year.

Kim was her rock and was always there as a shoulder to cry on, and she knew everything about her first love – including Paisley losing her virginity to Will.

Despite this, Kim and Will started dating and became a serious couple – even moving in together.

Paisley was devastated when she found out and cut them both out of her life.

In February 2015, Kim messaged Paisley out of the blue after three years of not speaking saying how she will never forgive herself for choosing Will after her. Her relationship had ended with Will and she wanted Paisley back in her life.

Forgiving Paisley accepted her apology and the pair are now friends again. But Paisley says she’ll never fully trust her around any future boyfriend again.

Paisley said: “When people get in touch with a similar story I can completely relate to everything they’re saying.

“Having experienced heartbreak and betrayal first hand I know just how much it hurts. When I found out about Kim and Will it was the most devastating and humiliating moment of my life. To lose my boyfriend was bad enough but to lose my best friend too was horrific.

“But writing the story for Love It was actually very cathartic, I feel like I can completely let go now.”

If you’ve been betrayed by someone you love – be it a family member, friend or partner – we can help you tell your side of the story. Fill out the form on this page or call us on 0207 549 5406 (Paisley might even be the team member who picks up your call!).

To find out more about sharing your story with a magazine, see our Sell My Story to a Magazine page. You can also see read about how much your story could be worth on our Story Valuation page.

See a selection of our recent stories and posts below:

Paisley Gilmour
← Previous Story We lost it all, and now we live in our car
Next Story → IVF egg donor helped other couples have five children!