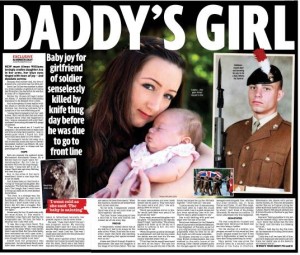 Last November, the family of Fusilier David Lee Collins found themselves making national news headlines when he was stabbed to death in the popular holiday resort of Ayia Napa the day before he was due to be deployed to Afghanistan. What they didn’t know at the time though was that David’s girlfriend Aimee was pregnant, and that in the midst of the tragedy, they would be blessed with the arrival of David’s daughter Ava.

In January 2013, British national Mohammed Abdulkadir Osman, 19, who is of Somali origin, admitted manslaughter at a court hearing in Larnaca, Photini Larcou. In May 2013, he was convicted of manslaughter and jailed for eight years.

David’s girlfriend, Aimee Williams, found out she was five weeks pregnant shortly after his death and has just given birth to a beautiful baby girl, Ava. We helped her and David’s mother secure an exclusive deal for their story with a national newspaper. At the time of David’s death, neither he or Aimee knew they were about to be blessed with a baby.

Heartbreakingly, David never knew she was expecting and will never meet his little girl after his life was cruelly snatched away in what’s believed to have been a senseless and unprovoked attack.

David’s family say words can’t describe their loss, and they’ll never understand how anyone could hurt David. Aimee says: ‘When I first held Ava, all the memories of David came flooding back. He may never have the chance to know her, but we’ll make sure she knows all about her hero soldier daddy when she grows up. She’s all that we’ve got left of him.’

If your family has been caught up in the news, and you would like to share your story, email us on message@talktothepress.com or fill out our sell my story form to the right

Talk to the Press
← Previous Story TTTP features editor @georgetteculley with This Morning’s Holly and Phil
Next Story → How selling your story can raise awareness: ‘Help me find the thugs that did this to me’