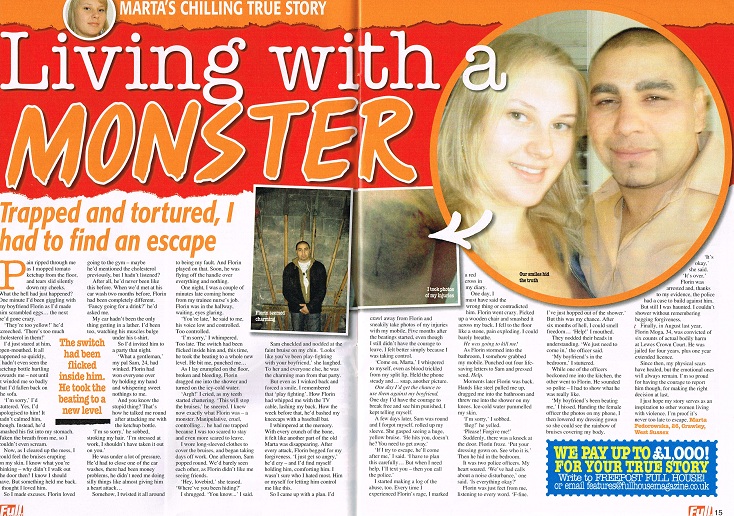 Marta Fedorowska, 26, got in touch with us as she wanted to show other women who are trapped in violent relationships that it’s never too late to escape, and we placed her true story in Full House magazine.

Last year Marta’s violent ex-boyfriend Florin Moga was jailed for four years for a series of brutal attacks on her, which left her battered and bruised and fearing for her life.

The couple met when Marta visited the car wash where Florin worked and, like many controlling men, she says there were no outward signs of the monster he would become. He was loving and attentive and within weeks the couple had moved in together.But Florin became increasingly controlling and Marta recalls how one day he flipped and attacked her in the kitchen after a row over eggs. Although it was a trivial argument, Marta says it marked the beginning of a terrifying ordeal.

Soon Florin was beating up his Marta several times a week, leaving her in agony and covered in bruises. In a truly sadistic twist, he would make his girlfriend sit under a freezing cold shower after each beating as ‘punishment’ for disobeying him.

Fearing for her life, Marta eventually found the courage to report Florin after confiding in a friend who was horrified on hearing of her ordeal. The police arrived to arrest him while she was enduring one of his cruel punishments in the shower and he was later sentenced to four years in jail.

Marta says: ‘I hope my story serves as an inspiration to other women who are living with violence. I’m proof it’s never too late to escape.’