How to Raise Awareness of a Crime 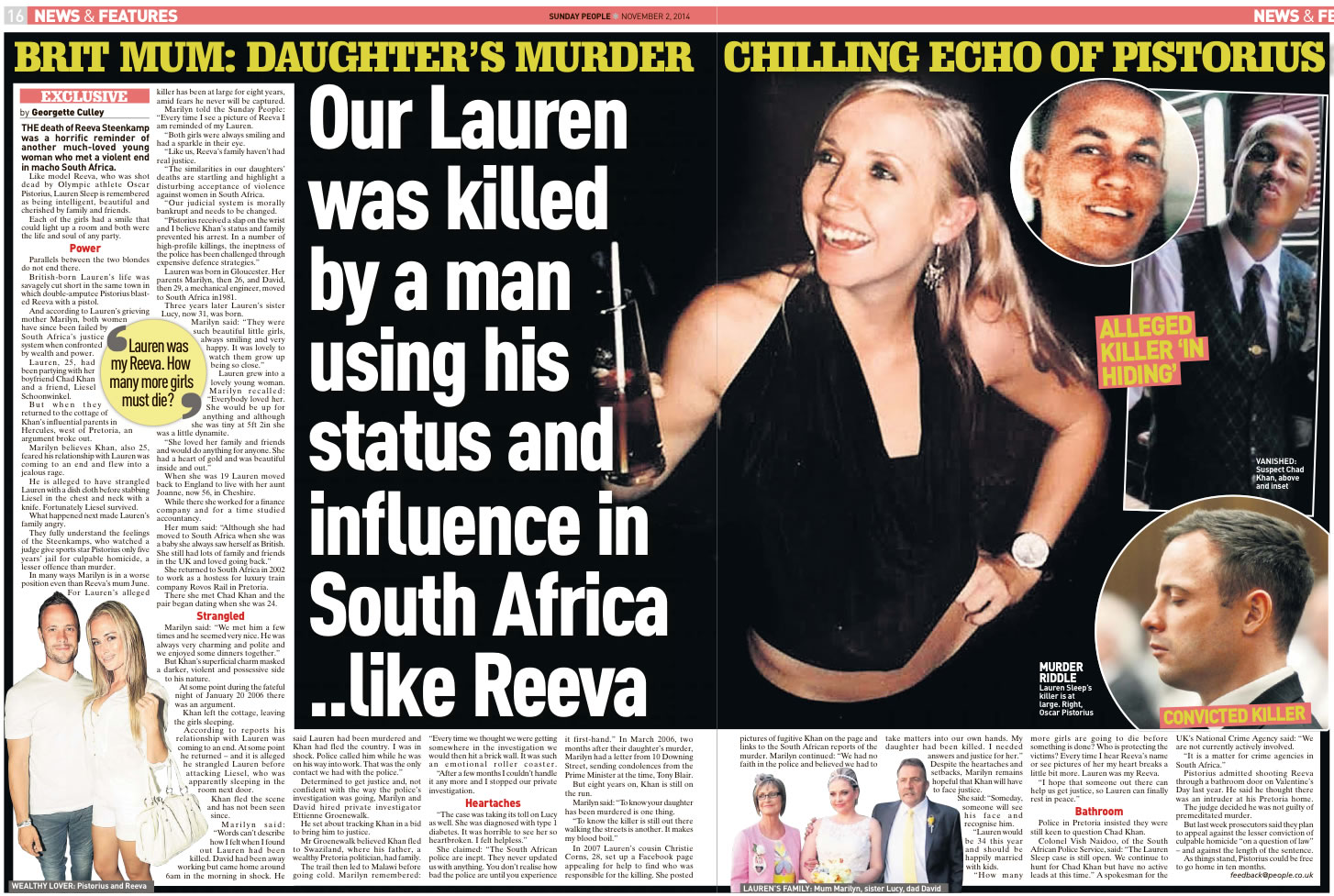 Talk to the Press help British mother raise awareness over her daughter’s murder whose killer is still at large. If you would like to find out how to raise awareness of a crime, contact our press team today.

For Marilyn Sleeper, the death of Reeva Steenkamp was a horrific reminder of her much-loved daughter who met a violent end in macho South Africa. Like model Reeva, who was shot dead by Olympic athlete Oscar Pistorius, Lauren Sleep is remembered as being intelligent, beautiful and cherished by family and friends.

Each of the girls had a smile that could light up a room and both were the life and soul of any party. Parallels between the two blondes do not end there. British-born Lauren’s life was savagely cut short in the same town in which double-amputee Pistorius blasted Reeva with a pistol. And according to Marilyn, both women have since been failed by South Africa’s justice system when confronted by wealth and power.

Lauren, 25, had been partying with her boyfriend Chad Khan and a friend, Liesel Schoonwinkel. But when they returned to the cottage of Khan’s influential parents in Hercules, west of Pretoria, an argument broke out.

Marilyn believes Khan, also 25, feared his relationship with Lauren was coming to an end and flew into a jealous rage. He is alleged to have strangled Lauren with a dish cloth before stabbing Liesel in the chest and neck with a knife. Fortunately Liesel survived. What happened next made Lauren’s family angry.

They fully understand the feelings of the Steenkamps, who watched a judge give sports star Pistorius only five years’ jail for culpable homicide, a lesser offense than murder. In many ways Marilyn is in a worse position even than Reeva’s mum June. For Lauren’s alleged killer has been at large for eight years, amid fears he never will be captured.

Marilyn told the Sunday People: “Every time I see a picture of Reeva I am reminded of my Lauren. Both girls were always smiling and had a sparkle in their eye.

“Like us, Reeva’s family haven’t had real justice. The similarities in our daughters’ deaths are startling and highlight a disturbing acceptance of violence against women in South Africa. Our judicial system is morally bankrupt and needs to be changed. Pistorius received a slap on the wrist and I believe Khan’s status and family prevented his arrest. In a number of high-profile killings, the ineptness of the police has been challenged through expensive defense strategies.”

Colonel Vish Naidoo, of the South African Police Service, said: “The Lauren Sleep case is still open. We continue to hunt for Chad Khan but have no active leads at this time.”

Talk to the Press placed Marilyn’s story for an exclusive spread with the Sunday People before it was syndicated on the news wires. The story has since been picked up in papers all over the world and the family have new leads to follow.

The family said: “We’ve had a fantastic response from the public already and new information to the whereabouts of Khan.”

If you would like help raising awareness of a crime, or any other important issue, please contact our press team today. You can complete the quick contact form on the right hand side of this page (one of our team will call you back to discuss your story) or you can call our newsdesk (see our contact us page for more information https://www.talktothepress.co.uk/contact-us).